The Art of Modelling Aluminium Atoms

Because he can simulate how atoms behave when aluminium is deformed, Jonas Frafjord knows better than most that the devil is in the details.

«Imagine bending an aluminium spoon», says Jonas Frafjord.
«The deformation that you observe is a combination of millions of small defects at the atomic level. They have the form of lines, and as a response to the stress exerted by bending the metal, they become rearranged. When they move, they cause tiny structural changes in the interior of the metal».

TOWARDS DIGITAL DESIGN OF TAILOR-MADE ALLOYS 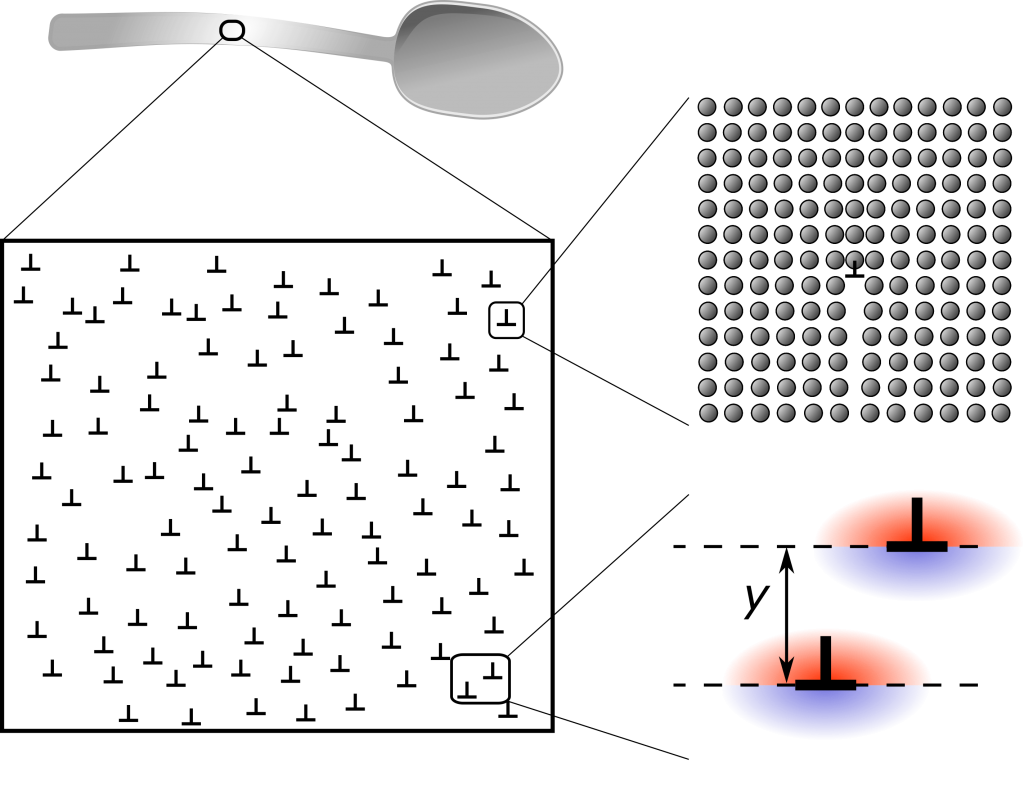 Aluminium is a favourite among engineers and architects, and is one of the most commonly used materials in the global construction industry. When structures deform, the damage always starts in the microstructures and the smallest of the building blocks. The tiny defects Frafjord describes, are called dislocations. They are extremely interesting for materials scientists, as they are the ones that actually govern plastic deformation.
As a PhD candidate in the Lower Scale programme of SFI CASA, Frafjord has spent 4 years in the company of dislocations, crystals, grains, particles, atoms and electrons. The upcoming doctor has gained fundamental insight into how these incredibly small things move and interact with each other. Frafjord transfers this behaviour into computer simulations. Thus, his research paves the way for the digital design of tailor-made alloys.

A KEY TO STRONGER METALS

«Knowing how the different parts of the system interact and how they behave and respond to the external pressure is important. Actually, it is the key to making better, stronger and suitable alloys that have the desired properties for their particular purpose», he says.
Returning to the spoon. Looking through a microscope, one can see that the metal consists of many tiny grains. They rotate, and deform as the spoon is bending, due to the movement of the dislocation. Inside the grains are particles, which consist of atoms with their nuclei and electrons.
Solute elements like magnesium, copper, or silicon are added to make the alloys stronger. The solutes impede the dislocation motion and make the material harder to bend. They have different properties which affect the dislocation. Frafjord describes what happens:
«Imagine a dislocation as a line of associated strain that is traveling through the vast sea of aluminium atoms (se video below). Suddenly, one part of the line feels a repulsion from a magnesium atom that causes an obstruction in the traveling direction. The combined interaction of many such solute atoms is strong enough to hinder the dislocation from moving further, and the deformation is temporarily halted. ».

«These tiny elements are the main concern of my work. Without adding the solutes, aluminium would be soft and useless as a structural material». Frafjord explains.

«Lower Scale» is one out of five research programs in CASA. The program is led by Frafjord´s supervisor, professor Randi Holmestad at the Department of Physics, NTNU. One important objective is «to develop a credible multiscale framework for advanced structural analysis down to the atomistic scale».
Holmestad admits that the then fresh PhD candidate was was given some extremely challenging tasks back in 2016. Dislocations are responsible for plastic phenomena but have to be described at an atomistic scale. They are essential both when they are racing around, and when they are statically bound to a lattice.
Due to their numerous counts and long-range effects, dislocations are challenging to incorporate in higher scale models. Innumerable questions swirled around: How does the solute atoms behave in the presence a dislocation? What happens when the metal is put under pressure or strain? Can we prove the response by atomistic calculations?
Formidable and complex challenges. But now, four years later, Jonas Frafjord is confident that he has made a substantial contribution to the multiscale framework. 18 december he defends his thesis. He describes his end product as a well-described methodology for lower scale modelling of defects in aluminium. 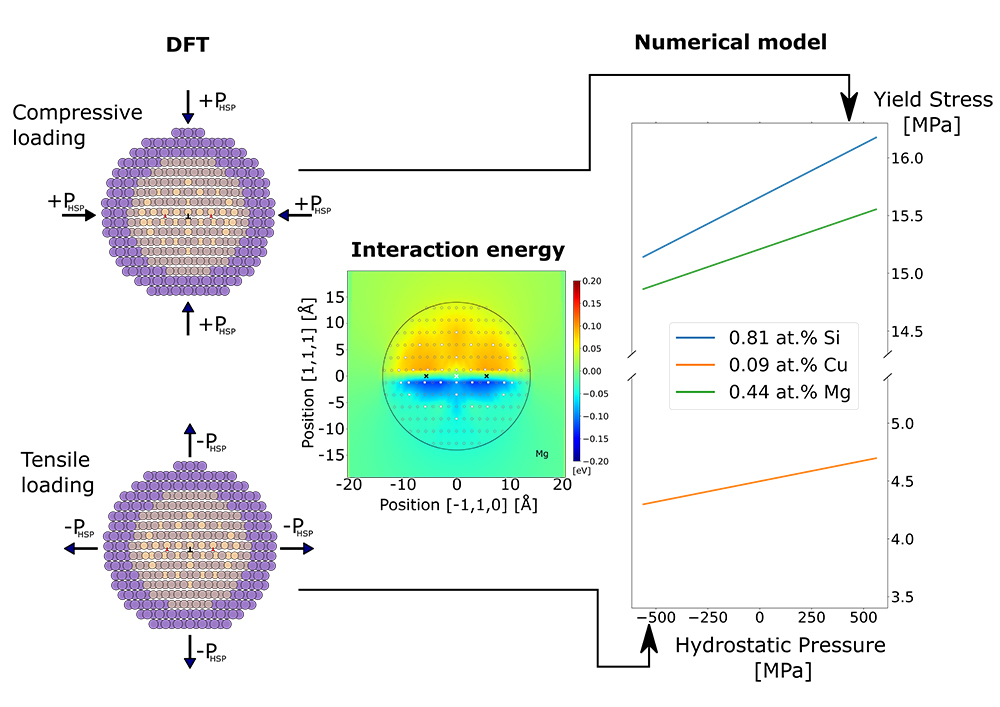 Frafjord´s work aims to bridge the simulations at the nanoscale to simulations at the continuum scale. The latter is the scale where engineers, architects and industrial designers operate. He explains how he worked his way through:
«The gap in these scales is a challenge in terms of length and time. Static calculations are the most accurate at the lower scale. All the atomistic scale studies have been designed to be coupled to the phenomenons on a larger scale. This has been achieved by calculating interaction energies at an atomic scale and used these parameters to describe the effect at the continuum scale».
One of the many things he found difficult as a fresh PhD student, was to find concise and easy to understand literature, explaining how to model dislocations in aluminium alloys.

«Now, I hope that my work will serve as a comprehensive and concise explanation for new PhD students or graduate students. I also hope that it has shed light on some of the difficulties of coupling structural analysis to atomistic scale, and how these can be threated. ».
So, why did he choose to do a PhD on this topic?
«Coming from a theoretical background, I wanted to do my PhD on a topic that had a tangible connection to the real world. The topic of atomistic calculations was not alien to me, and I thought the PhD position would allow me to apply the theory practically. I have also enjoyed numerical calculations and coding during my studies. It was something that I missed when writing my MSc thesis».

Jonas Frafjord has spent a substantial amount of time in the world of quantum mechanical principles. Put simple, quantum mechanics explains how the universe works at a scale smaller than atoms. He says this branch of physics has intrigued him since he was first introduced to it as an MSc student.
The computational requirements of atomistic calculations are exceptionally computationally demanding. The following description by Frafjord gives an idea of exactly how demanding they are:
«Consider a 10 cm long strand of hair made out of aluminium. In this aluminium piece, there would be  a billion trillion aluminium atoms. Each atom is affected by the others. Thus, for each time step, one would have to perform 12  calculations for each atom just to get the interactions with the nearest neighbour.
The fastest computer in the world, 183 years to calculate 1 nanosecond of evolution. Not to mention the amount of data such a simulation would create». 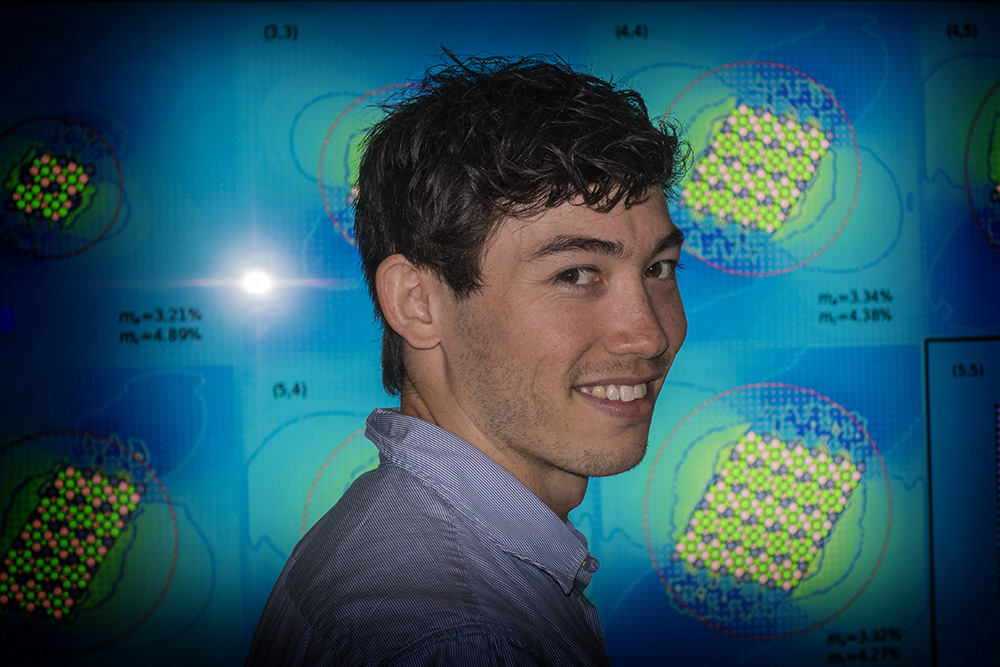 However, Jonas Frafjord says that the computational intensity of atomic-scale simulations is a challenge, but not a deal-breaker.
«It puts a demand on more intelligent model designs and smart methodology. Sometimes it requires us to isolate parts of the system, use different methods, and then connect the subsystems to explain the problem we were investigating».
He underlines that atomic simulations are useful for the development of fundamental understanding. Even though the material can be explained by empirical equations, deep down, the atoms are governed by the fundamental laws of nature.
«All answers can be explained by these laws if we were able to account for the complexity of it. Hopefully, isolated parts of the systems can be understood, and help to identify the impacts at a larger scale».

CHALLENGES AT BOTH ENDS OF THE SCALE

– What are the main challenges of the multiscale approach?
«One of the main challenges is the difference in approach between the top-down and the bottom-up approach. When increasing the system size from a lower scale point of view, we quickly hit a brick wall due to the increase in the computational demand. At the larger scale, going down, the empirical variables are hard to separate into smaller constituents which are directly linked to a parameter at lower scale».
Jonas Frafjord admits that, at times, the many constituents of aluminium alloys have been overwhelming. It has been challenging to isolate systems which would be beneficial for the project.
«Mostly, I have enjoyed the challenges, and finding solutions have been rewarding. Long hours spent analysing problems, have also led to new challenges and ideas for future investigations».

READ MORE: Rocking Around at the Nanoscale
READ MORE: Cavities – The Weakest Link in Aluminium Alloys

«HOPEFULLY, ANOTHER STEP IN THE RIGHT DIRECTION».

Who needs the new knowledge he has gained, and how may society benefit from it?
«My work has explored the opportunities of atomistic simulations, and how accurate and efficient some solutions are compared to others. New students can hopefully use it as a doorway to atomistic modelling of aluminium alloys. The aluminium industry gain a better understanding of the nuts and bolts that their continuum models rely on».
«Science is an incremental process. From an environmental perspective, society will benefit from increased use of tailor-made digital alloy design, as the need for material testing would decrease. To get there, we must define a strong fundamental multiscale framework. Hopefully, my work is another step in the right direction».
After handing in his thesis, he started to work as a postdoc in the project SumAl (Solute cluster manipulation for optimised properties in Al-Mg-Si based Al alloys). Head of the project is his supervisor, professor Randi Holmestad. Research scientist Inga Gudem Ringdalen and Senior Research Scientist Jesper Friis, both employed by SINTEF, has been Frafjord´s co-supervisors.