Luca Lomazzi went from Politecnico di Milano to blast metal plates in the SIMLab Shock Tube Facility this winter. Upon leaving, he said, «I bring home loads of new experimental data. Plus, a new way of using Machine Learning».

PhD candidate Lomazzi has a strong interest in extreme loading conditions. He investigates how metal and composite plates behave under severe blast events. For that, he uses numerical simulations. His doctoral work aims to use artificial intelligence methods to assess the response and predict how structural damage evolves in metals and structures exposed to severe blasts.

LOOKING FOR A TEST FACILITY

Well into his 2nd year of doctoral studies at the SIGMALab research group at Politecnico di Milano, he started to look for a test facility. He needed access to new experimental data, and he wanted to develop new data-driven approaches to enhance numerical models.
The ball started rolling when he came across some of Associate professor Vegard Aune’s works. 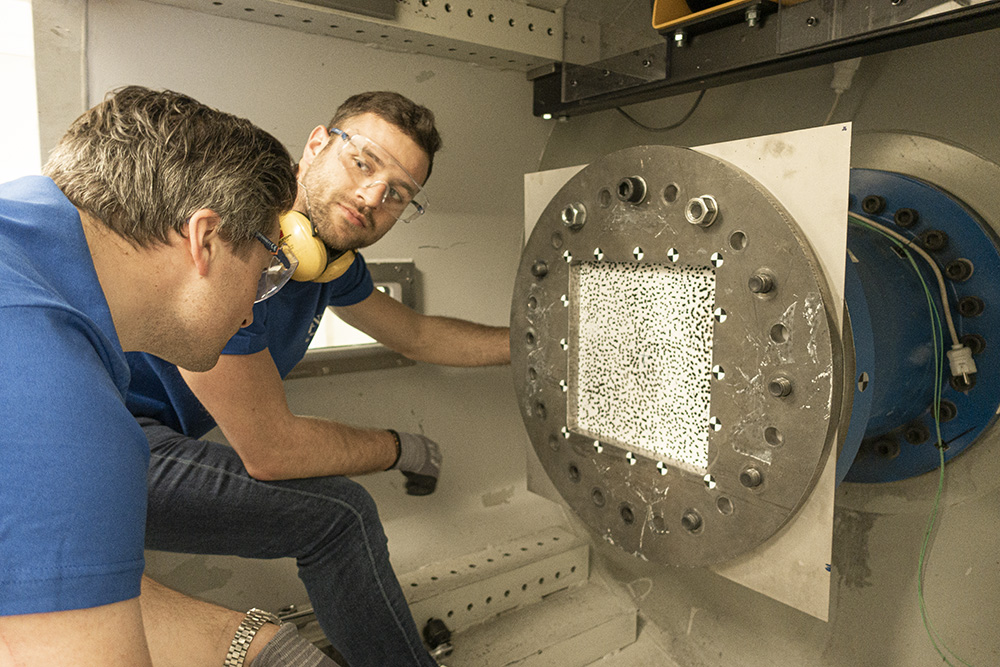 «I found them extremely interesting», Lomazzi says.
Aune is an expert in severe blast loading events, and the starting point of his research is precisely the unique and eventually quite famous Shock Tube Facility of SIMLab. The Associate Professor agreed that it would be good if Lomazzi spent part of his PhD period with the SIMLab group. Eventually, they teamed up with Associate professor David Morin, also described as Mr Machine Learning at the SIMLab research group.

RETURNS TO TRONDHEIM FOR THE ICILSM 2022

Both Aune and Lomazzi agree that from here, the story begins to look a lot like a success story.
«Absolutely. Our collaboration continues. I think the stay at the SIMLab group will make up the most important part of my doctoral work», Lomazzi says.
In June, he heads back to Trondheim again to attend the ICILSM 2022 Conference.
Here, he will give a lecture: Data-driven approach to account for fluid-structure interaction effects on blast loaded steel plates. The lecture is an extract of a paper that will be published in collaboration with Lomazzi’s supervisors, Professors Andrea Manes and Francesco Cadini, David Morin, and Vegard Aune.

The research activities of the SIGMALab group mainly focus on structural integrity assessment and the design of mechanical and aerospace components. Also, Professor Manes is a longtime friend and collaborator of the researchers at SIMLab and SFI CASA. It was him who, in the first place, encouraged Luca Lomazzi to travel up north to Norway during mid-winter. 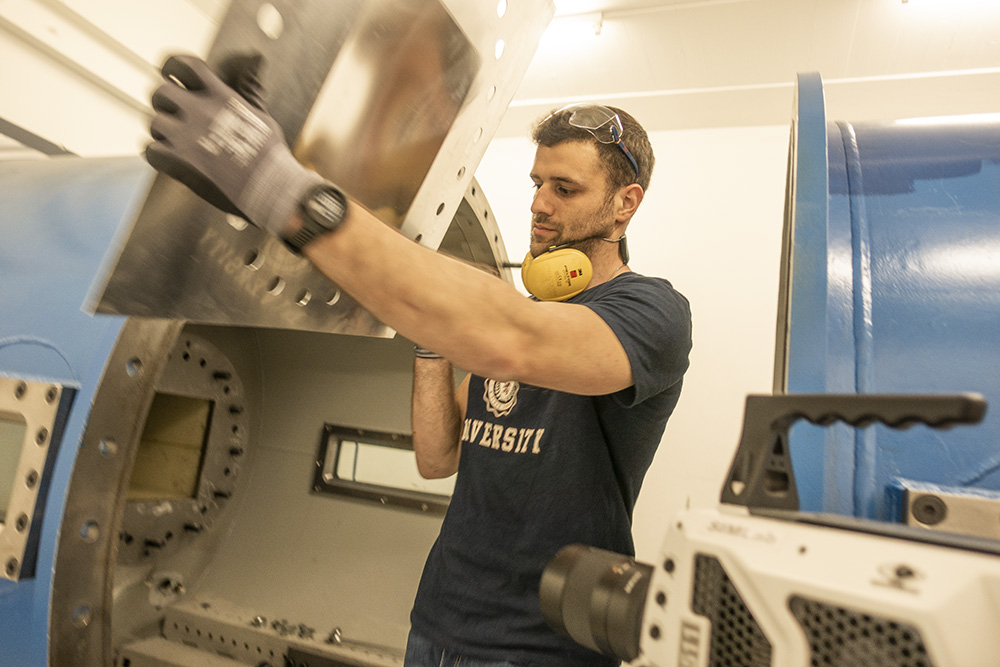 Blast loadings represent a critical damaging event in all structures. The structure’s behaviour during such events has been extensively investigated through experimental tests over the last decades. However, such tests are challenging. At the same time, the data they generate is essential for developing reliable, fast, and predictive tools to estimate blast load effects.

THE IMPORTANCE OF UNDERSTANDING FSI EFFECTS

The core of Lomazzi and his fellow researcher’s efforts lies in understanding the physics behind the Fluid-structure interaction (FSI) effects, especially how structural deformation influences blast wave properties. FSI is the two-way interaction of a fluid flow with a solid structure. Anywhere a fluid and a structure meet, FSI occurs. Just think of strong gusts of wind rotating a turbine blade, or hitting a bridge structure. Or, in our case, a shock wave hitting a metal plate in a shock tube. Understanding what happens is critical. Not accounting for it may lead to anything from annoying noise to complete failure. Whether you’re designing a bridge, aircraft, or gas turbine: understanding how the interaction of fluids and structures impacts your project is a must. 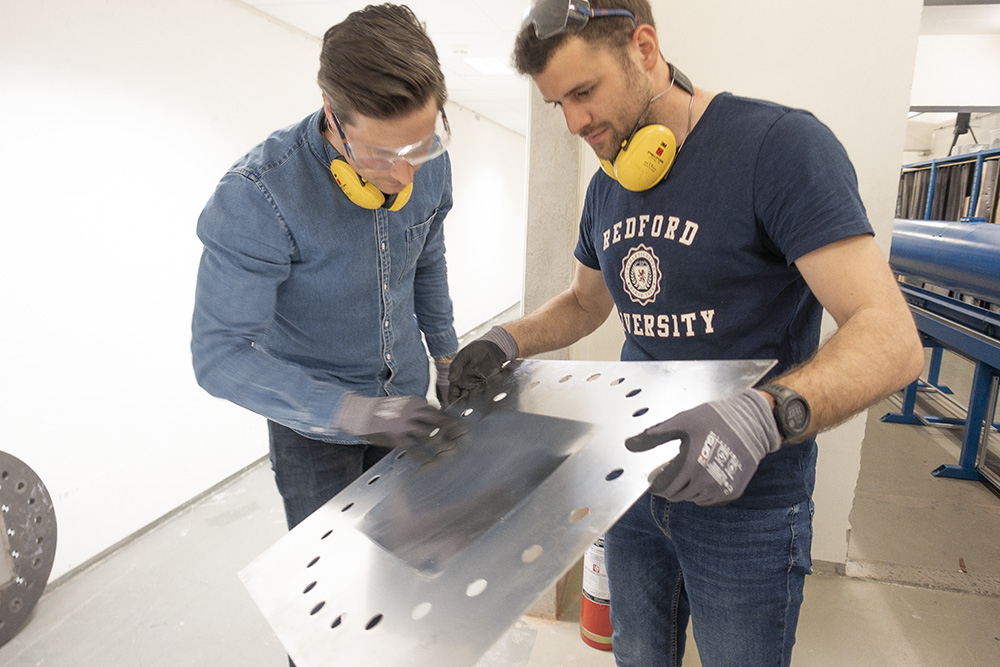 «I aim to develop a new method that is uncoupled but at the same time able to predict the FSI effects. By combining machine learning and numerical simulations in blast loading, we can speed up the computations. Also, using ML to understand the physics behind the FSI effects is a new way of using artificial intelligence», says Luca Lomazzi.
Machine learning (ML) uses mathematical computer models to help a computer learn without direct instruction. It uses algorithms to identify patterns in data. Then, the computer uses these patterns to create a data model that can make predictions. With increased data and experience, the results from ML become more accurate. It is comparable to people improving their skills by practicing.

… CAN POSSIBLY BOOST THE INDUSTRY

According to PhD student Luca Lomazzi, any industry that builds protective structures against blast loadings and extreme impact may benefit from this research. Also, saving weight is essential for some, like the aerospace industry. Thus, the scientists who help to account for the FSI-effects help engineers design and build lighter structures.
«This is important. Industrial designers need the coupled approach to develop the optimal solutions for their projects. They need a tool that gives them the same results with less effort, less time, and less money spent», says Lomazzi.

-Do you feel confident that your work will make a difference?
«That’s a hard question. I think it will make a difference, but mainly in blast loading. My approach is general, but we apply it to blast loading conditions – because of the unsolved challenges of the FSI-effects».
He recently brought home loads of data from the experimental tests in the SIMLab Shock Tube facility. Plus, he says, he brought home some new ways of using ML.
«Without my stay here, I would not have been able to have the experimental data, which are paramount for my work. Without the access to such data, I would not have been able to merge Machine Learning and accurate numerical models», says Luca Lomazzi.