In France, earthquake and depressurization effects are considered as a reference accident when engineers design the interior of nuclear power plants. That explains why french researchers subjected fuel rods to severe shockwaves in SIMLabs shock tube recently.

If not managed effectively, a so-called loss-of-coolant accident (LOCA) in a Pressurized Water Nuclear Reactor (PWR) reactor could lead to severe damage. Each nuclear plant has an emergency cooling system to deal with a LOCA, that typically could initiate from earthquake effects or other incidents of a sudden and severe impact.

Vincent Faucher (left, photo below) works as a Senior Expert at the French Alternative Energies and Atomic Energy Commission (CEA) at Cadarache. Together with PhD candidate Samy Mokhtari, 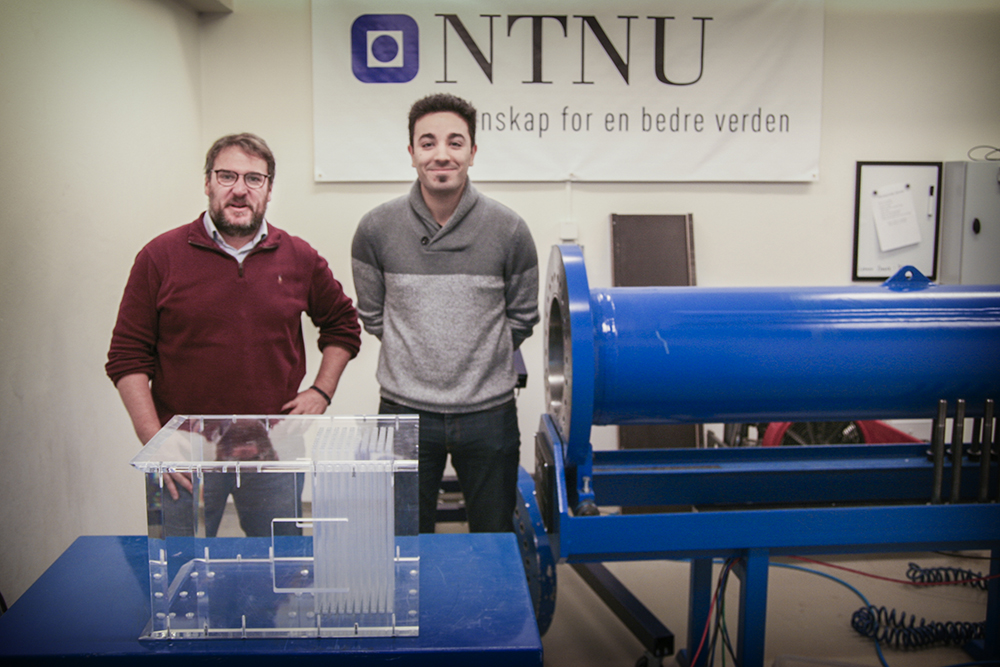 Faucher visited SIMLab just before Christmas. According to the researchers, the French Nuclear Safety Authority consider LOCA and earthquake effects as the reference accident in the engineering and the design of the nuclear vessel internals.
A severe incident that leads to breakage or damage to the primary coolant pipes will create a rarefaction wave. Next, the wave will propagate in the entire loop and primarily through the reactor core inside the main vessel.

A PWR fuel assembly appears as a bundle of fuel rods. The rods contain uranium-oxide pellets. Assembled in a 17×17 network, they are maintained together by spacing grids. The total length of an assembly in an operating plant is around 4.5 metres with 9 to 10 grids and a span length between grids around 0.5 metres.
For the experiments in Trondheim, Faucher and Mokhtari brought with them a PMMA (Polymethylmethacrylate) specimen. The specimen was specially manufactured at CEA in France and was composed of a 10×10 bundle of 0.3 metre long rods. The diameter and spacing between them were representatives of a PWR fuel assembly. The bundle was contained in a PMMA box for the shock tube tests.

In Vincent Faucher´s words, the tests address the topic of the dynamic response of nuclear PWR fuel assemblies to a transverse pressure wave. The intention is to provide some new knowledge, and reference data for code validation for the response 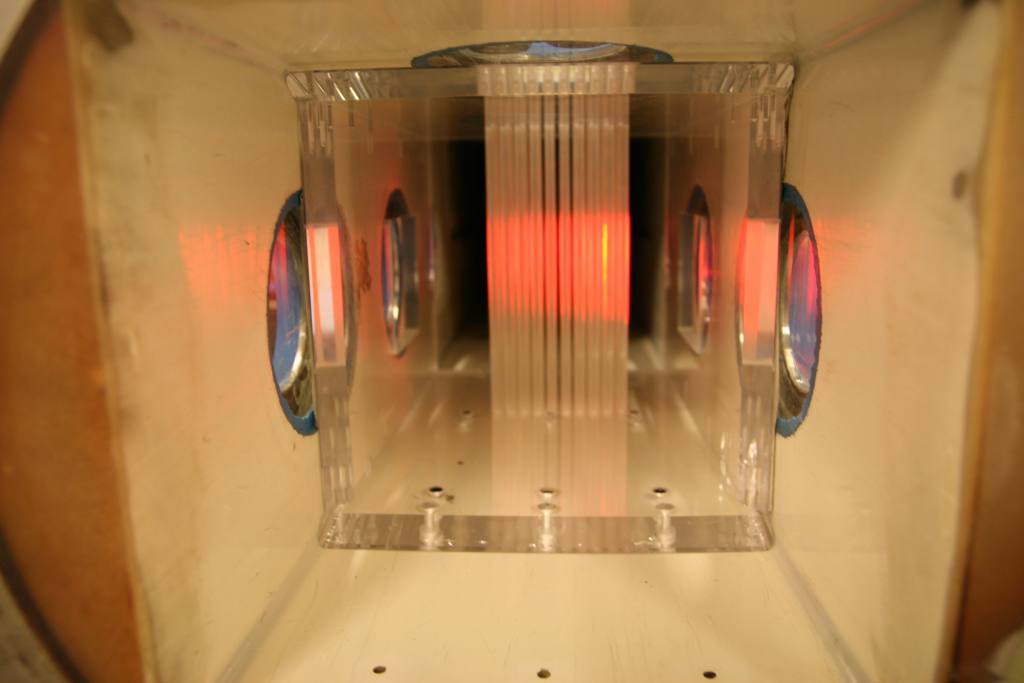 of a simple bundle submitted to such a wave.

The first result of interest is the way the flexible bundle alters the incoming pressure signal, which is achieved by evaluating the transfer function between the pressure measurements in the tube upstream and downstream the bundle.

Also, additional data related to rod deformations obtained with high-speed camera are of great value. The data are used to assess detailed numerical models for use with EUROPLEXUS (EPX) Software. Both experimental data and local scale numerical results will be used to design and validate upper-scale homogenised models through the section of the assembly. To be able to run analyses for a complete PWR nuclear core under significant loading condition, this type of models are mandatory. This work will also be part of PhD candidate Sami Mokthari´s scientific work in France.

According to the researchers, they tested two loading conditions in the shock tube. The first with a shock resulting from overpressure of 2.5 bars in the high-pressure chamber of the tube. The second test with a shock resulting from overpressure of 5 bars. The first test was entirely satisfactory. It provides all the expected data in terms of both pressure measurement and rod deformation visualization.
However, the second test failed due to the fragile behavior of the PMMA in the box. The material was chosen for global transparency, but proved unable to sustain several load sequences in these conditions.
No matter what, the results before failure are satisfactory, according to Vincent Faucher.
To sum up, the researcher states that all the expectations for this testing program are fulfilled with no reservation: yielding promising perspectives for data analysis, physical interpretation and multi-scale experiment/simulation comparisons (See figure below). 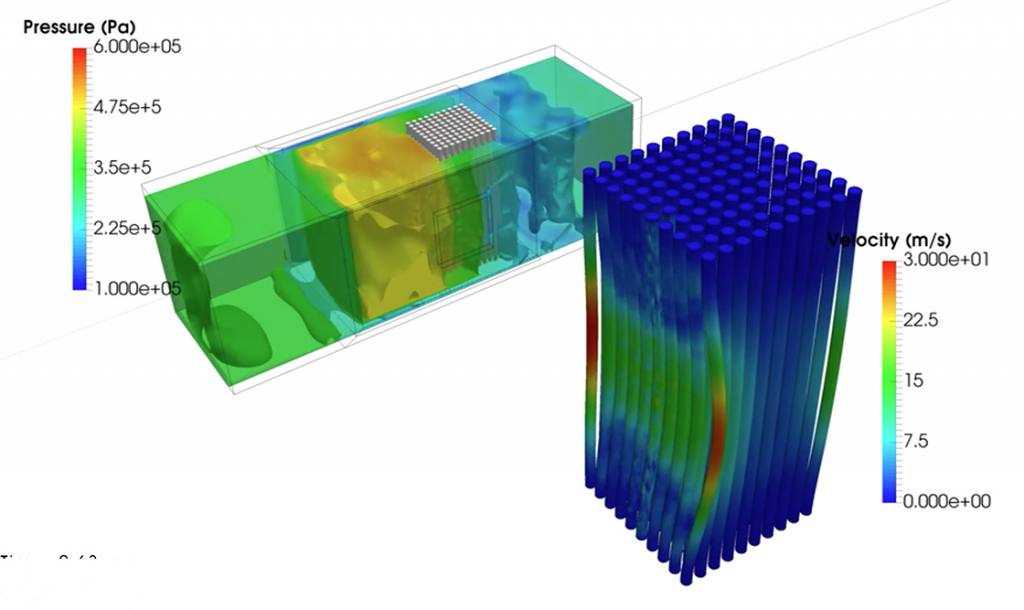 The present visit is a result of collaborative work on fast transient fluid-structure dynamics. The foundation is extensive research actions between NTNU and the Joint Research Center (JRC) from the European Commission in Ispra with the EPX software.

According to Associate professor Vegard Aune and Senior expert Vincent Faucher, SIMLab and CEA’s development team have linked up as a result of the co-ownership of the EPX program between JRC and CEA. One important aspect is to include the French expertise on fluid-structure solvers and associated parallel computing in the collaboration.
During the first short visit in April 2019, the researchers decided to go for an extended stay at the end of the year. Also, they found the opportunity to benefit from the shock tube facility on one specific topic of interest. The recent tests on the fuel assemblies at CEA is a result of that. Aune and Faucher state that this is one way to strengthen potential joint work directly between CEA and NTNU. These activities run alongside with the ongoing collaboration between JRC and NTNU on numerical simulations of shock tube tests and the cooperation between NTNU and SINTEF Ocean.