Rocking Around at The Nanoscale

What happens deep inside aluminium when the material is bent and pulled to fracture? Emil Christiansen knows.

He studies the metal´s building blocks, down to the size of one-thousandth of a hairbreadth.
«We try to understand how the smallest building blocks behave, when we bend, stretch and deform the material. Simply because this knowledge will give us structural materials of higher quality », Emil Christiansen says.

He lists 3 use cases as examples on who this is good for – and why:

The PhD candidate works with nano-scale characterization at SFI CASA´s Lower scale programme. If you think of the Centre´s Virtual Laboratory (VL) as a modelling chain for the design of aluminium structures, Christiansen´s work fills in at the absolute starting point.

It takes the most powerful tool to study what happens at this level: Transmission Electron Microscopy, TEM. TEM enables the researchers to zoom in on precipitates with the length of one thousand of a hairbreadth.
It is one of the worlds most sophisticated microscopes. It works with the help of a beam of high energy electrons shot through a thin specimen. As they pass through, the electrons interact with the specimen and give detailed information about the materials.
Christiansen´s PhD story started out with his fascination for the instrument, the physics and the technicalities behind it. «It took nearly my whole Master´ thesis in Physics to understand the TEM and its abilities», he says.
Gradually, he became more and more curious about what happens inside the materials when they deform.
«Metallurgy has been practised for thousands of years. It is not until now that we can see what happens on the metals inside. I find that very exciting».

Why does nano-scale matter?

But, when you think of it. Aluminium alloys are not precisely produced in shiny white clean and sterile laboratories, are they? Raw materials are shipped across the world. Loaded, stored and unloaded many times before they reach the production plants and end up in enormous smelting furnaces. So, how could things exactly matter down at the atomic level? Why is it important to dig so deep down into the physics of the material?
«If we aim to make models that are reliable and based on physics, we have to go down on this scale. What happens on this level, determines how the material behaves when it deforms under strain», says Christiansen.
«The aluminium industry might not exactly have full control at the nano-scale, they only need to be close to», he jokes.

You have to go down there to see what really happens. It is like a reality-check on the theories. In a way, the answer book lies at the nano-scale

Pure aluminium is a soft, easily bendable material. Material researchers are passionate about the ductility in metals and alloys like aluminium. Ductility is a measure for formability, the materials ability to deform without fracturing. When aluminium is bent, stretched and deformed, the atoms are rocked around. These exciting motions are captured in the TEM.
Most metals are crystals or grains. They are built up of extremely well-organized atoms lying beautifully and neatly ordered in grids. Tiny amounts of magnesium or silicon can be added to strengthen aluminium. This is the stuff that forms the precipitates. These small, small particles are shaped like needles or disks and act like reinforcement bars in concrete.

The precipitates are key. According to Christiansen, physicists love them because of their significant influence. The temperature during processing is critical, it d 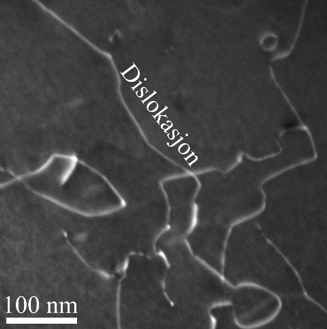 ecides the precipitates that harden the metal and contribute to its strength. And, just to give an idea of their size: Several billions of them would fit in on the size of a sugar lump.
When aluminium is put under strain or pressure, the neatly stacked atoms will move with the help of a particular type of grid defect.
«We call these defects dislocations (photo right), tiny shifts of all the atoms along a line within the crystal. If a noticeable deformation should happen, very many of these types of dislocations have to glide from one side of the crystal to another», Emil Christiansen explains.
The strength of a metal is decided by how easily the dislocations can be moved around.

The atoms that rule this universe of incomprehensible tiny detail seem quite humane in their behaviour.
For instance, magnesium or silicon. Each atom has its own sphere surrounded by a certain number of atoms, laid out in a stringent structure.
So, when the material is exposed to load or pressure, these atoms are pushed closer into one another´s intimate spheres. And they hate it. Naturally, it is like being invaded by troublesome neighbours from all sides. At a certain point, they have had enough. The moment when the invaders come too close is when the pressure or impact on the material becomes too strong. Then the atoms will give in, move away or dislocate. This is the moment where the material starts to deform.

«My PhD thesis is important, for the aluminium industry and for instance the automotive industry where the use of aluminium is rising quickly», says Emil Christiansen. 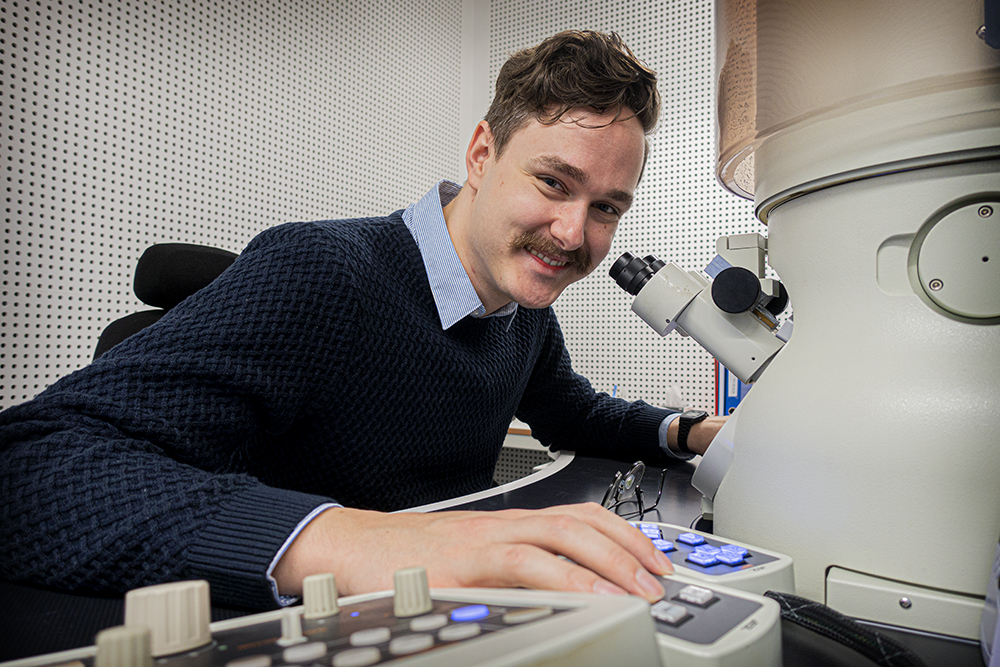 It is fascinating to observe, and absolutely possible to model material behaviour at the nano-scale. However, it is hard to say how relevant that would be for full-scale aluminium production. It would take tremendous amounts of computing power too, to model materials at this scale. Christiansen admits that it is demanding to put what you learn on lower scale to use at the larger scale.
«We have seen that in CASA too. But this knowledge could work as a kind of a compass or a guide towards improving today´s alloys and models».
And, according to Christiansen, there is a willingness to go after this new knowledge. CASA-partners Hydro and other players in the aluminium industry show great interest. He says that the fact that the producers have the knowledge down at the nano-scale gives them credit towards their customers.

«The answer-book lies at this scale»

«The use of aluminium has a long story, and we know a lot about the material. At the same time, when we study previous research, we find a lot of contradictory and also imprecise work. These works are still put to use, so we have to tidy up and maybe rip out a bit», he says with a smile.

«You have to go down there to see what really happens. It is like a reality-check on the theories. In a way, the answer book lies at the nano-scale».

The doctoral work has been carried out at the Department of Physics, where Professor Randi Holmestad has been Christiansen´s supervisor. Senior Research Scientist Calin Daniel Marioara (SINTEF) and Professor Odd Sture Hopperstad have been co-supervisors.