Allowed Back in the Lab After 2 Months Offset

A short time before scheduled laboratory tests for their Master’s theses, 4 students working with steel structures at SIMLab had to leave campus because of Covid-19. Now, two months later, NTNU is cautiously reopening and allowing them back in the lab to complete their experiments. 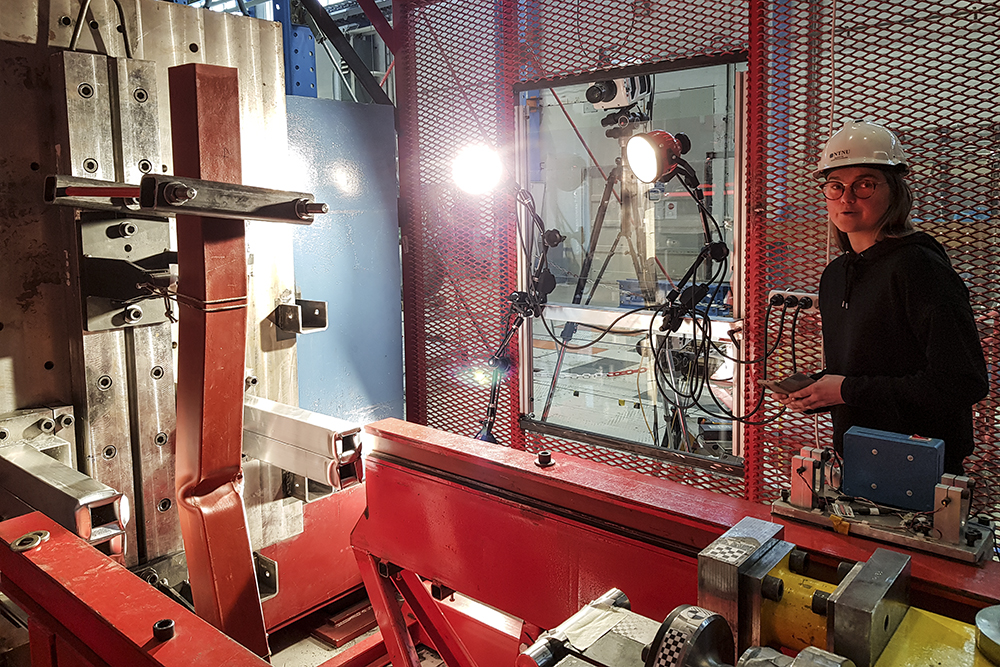 «The original plan was to perform all the tests continuously and finish up this part in mid-March. So, it was a bit of an offset», says Erla Christine Gudding. Her project concerns steel beams joined with so-called butt welds. The research questions whether there is an increased risk of failure in welds when they are exposed to dynamic load, e.g. due to explosion pressure. Just before Covid-19 led to the lock-down of campus Gudding completed some quasi-static bending tests. In parallel, she modelled the tests in Abaqus.

According to her supervisor, Professor Arild Holm Clausen (photo left), the material tests that were carried out in 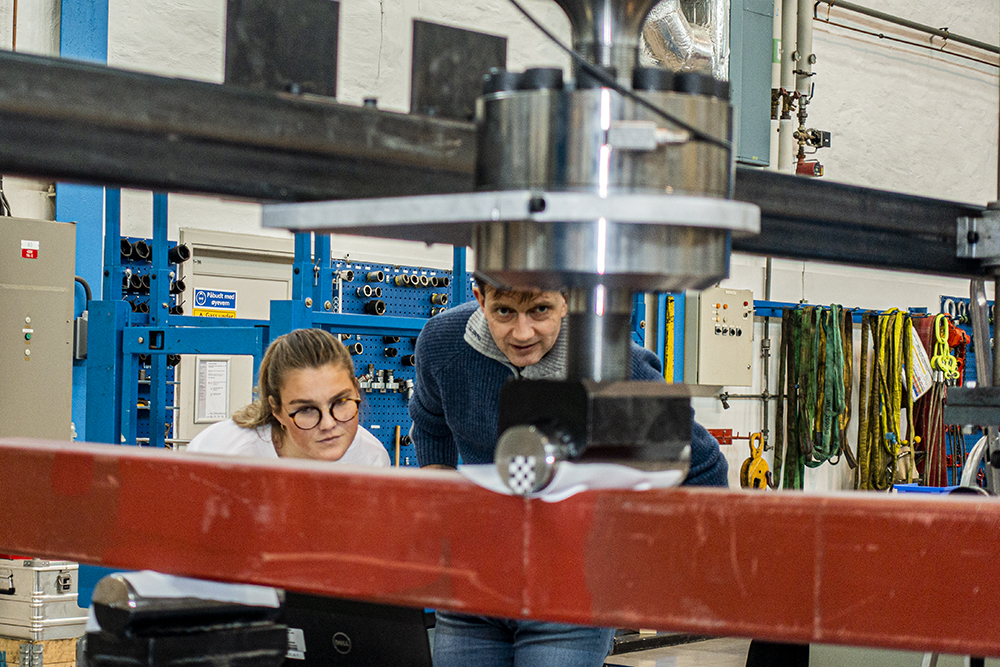 February revealed that the welds are almost as ductile as the base material around. «We have not been able to provoke failure in any of the bending tests. But the numerical model captures the observed response accurately», Clausen states. In mid-May, the student has eventually been able to perform the dynamic tests in the Kicking Machine. «It feels good to finally be able to finish the tests», says the MSc student. The theses are to be submitted 11 June. Gudding is considering applying for a deferred submission deadline to avoid too much hurry and stress.
«Of course, I would like to write the best possible thesis. There is a large amount of processing work with the last tests as well, so I might apply to be on the safe side», Gudding says.
SFI CASA´s partner Multiconsult initiated all 3 MSc thesis on steel structures hit by Corona this spring. Representatives of the company have followed the evolving projects closely and attended weekly digital meetings.

Oddvar Hestetræet Johannessen and Håkon Johannesen planned to do their experiments on 13 March, the day after NTNU locked down the campus.

The test programme includes both quasi-static and dynamic three-point bending tests on hollow sections with a pre-machined notch. The intention of the notch is to promote a crack, serving to evaluate the through-thickness damage regularisation (TTR) model in a shell element model of the beam. Luckily, the quasi-static tests could be performed by SINTEF during the student’s absence.  Recently, after 2 months delay, they were able to carry out the dynamic tests in the kicking machine.
«We have longed to be allowed back into the lab again and complete the experiments. As the work in the lab is an essential part of the thesis, the situation has been quite challenging during the lock-down. At some point, we were not sure if we would be able to finish the thesis on time», Oddvar H. Johannessen says.

As they are writing an article which they aim to publish, it was essential to complete the dynamic tests. Now, as the tests are complete, they feel utter relief. Both of them are confident that they will stick to the original plan and submit the thesis on time. Håkon Johannessen admits he had a feeling of peace of mind once they had all the test data in their hands.
The objective of their work is twofold. Firstly, to compare the mechanical behaviour of square hollow sections made of three different types of the steel grade S355 by performing uniaxial tensile tests and calibrating material parameters. Secondly, to calibrate and evaluate the TTR failure model in finite element simulations of the bending tests.  SIMLab Researcher Miguel Costas, who was active in the team proposing the TTR model a couple of years ago, is co-supervising the master’s thesis.

The 3rd Master’s project on steel hit by Corona this spring is student Ådne Lund’s thesis on the welded junction between the beam and the hollow profile column. 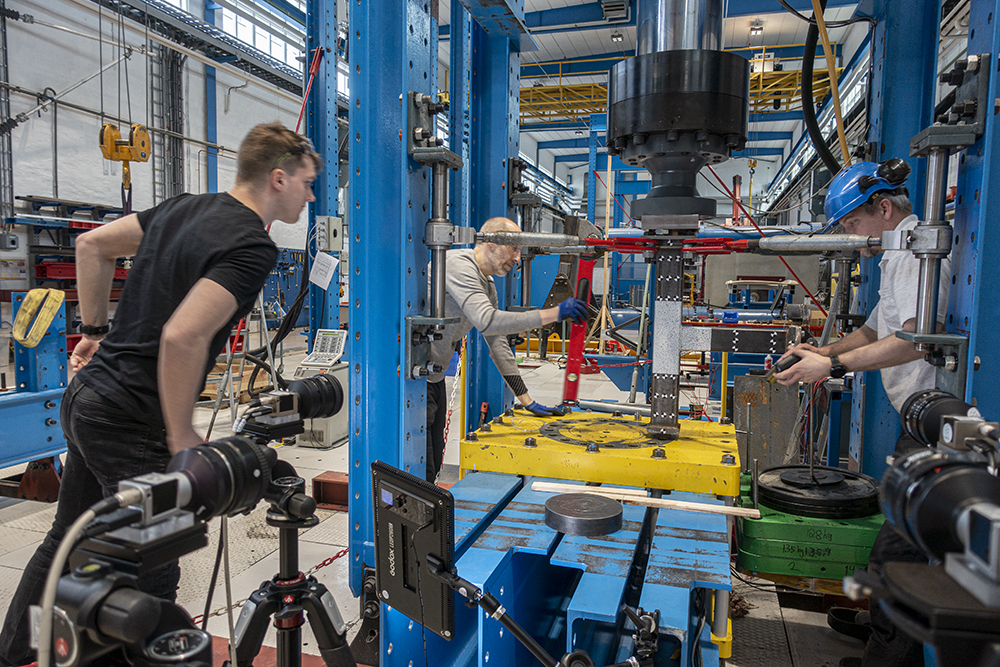 His supervisor, Professor Arild Holm Clausen, explains that there are calculation formulas in the design codes for steel structures. However, these are only validated through testing to a small extent. The data obtained from MSc student Lund’s experiments will be compared to the Eurocode hand calculation as well as to validate a FE modelling technique.The first two of eight tests in total were performed earlier in winter 2019/2020.
Now, Ådne Lund expresses relief to have finished the last six of his experiments.

«It is challenging to write and almost finish a thesis without having all the necessary data. But for now, the last tests went very well with no unforeseen surprises. My plan is to finish on time», the student says. Through an automated procedure, the developed FE model will then be used to generate results for a broader range of parameters and values. «In turn, the results will be used to better evaluate the prediction of the Eurocodes as well as other alternative formulas», according to Professor Clausen. Ådne Lund´s work is linked to the post.doc project of Panagiotis Manoleas, who followed the tests via videolink from Stockholm.
.