Her Research can Make Space a Safer Place

Space enthusiast and MSc student Rannveig Marie Færgestad is working on her dream thesis at SFI CASA. Her aim is to simulate what happens when orbital debris hits a spacecraft. 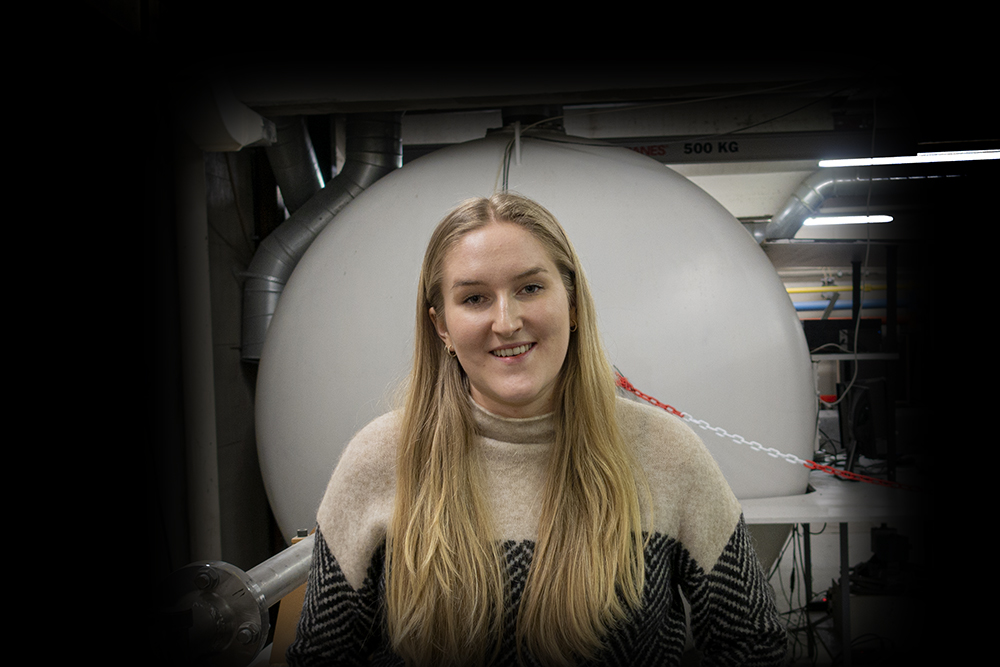 Space enthusiast and MSc student Rannveig Marie Færgestad is working on her dream thesis at SFI CASA. Her aim is to simulate what happens when orbital debris hits a spacecraft
«It is exciting – and complicated», Færgestad says with a big, enthusiastic smile on her face.
Since early January, the 25-year-old MSc student has worked on her thesis with the title «Modeling and simulation of hypervelocity impact against debris shields for spacecraft protection». This is research that might make space a safer place.

Space debris travels at breakneck speed and exists in countless combinations of shapes, sizes, and material properties. Micro-meteoroids or fragments from satellites that collide transform into millions of flying projectiles. The growing orbital debris environment is a challenge.

Depending on the fragment’s size, hypervelocity impacts can lead to anything from gradual weakening of the spacecraft protective shields to catastrophic collisions.
«Therefore, everything in orbit needs to take this risk into account. Especially the International Space Station, where there’s been a constant human presence for the last 20 years. The effort is all about designing the best possible shields with ultimate protection. That is, – without adding any unnecessary weight and volume. When sending stuff up into space, every gramme costs money», Færgestad explains.

Objects of smaller sizes are hard to detect on radars. Therefore, spacecraft designers have to develop shields that protect the spacecraft from unavoidable collisions. The shields have to be inspected regularly, and those that no longer give optimal protection are replaced.
«You can see that the replaced shields have thousands of small craters on the surface. I have seen such craters on one part of the Hubble Space Telescope‘s replaced solar panel. That was hefty», says Rannveig Ma 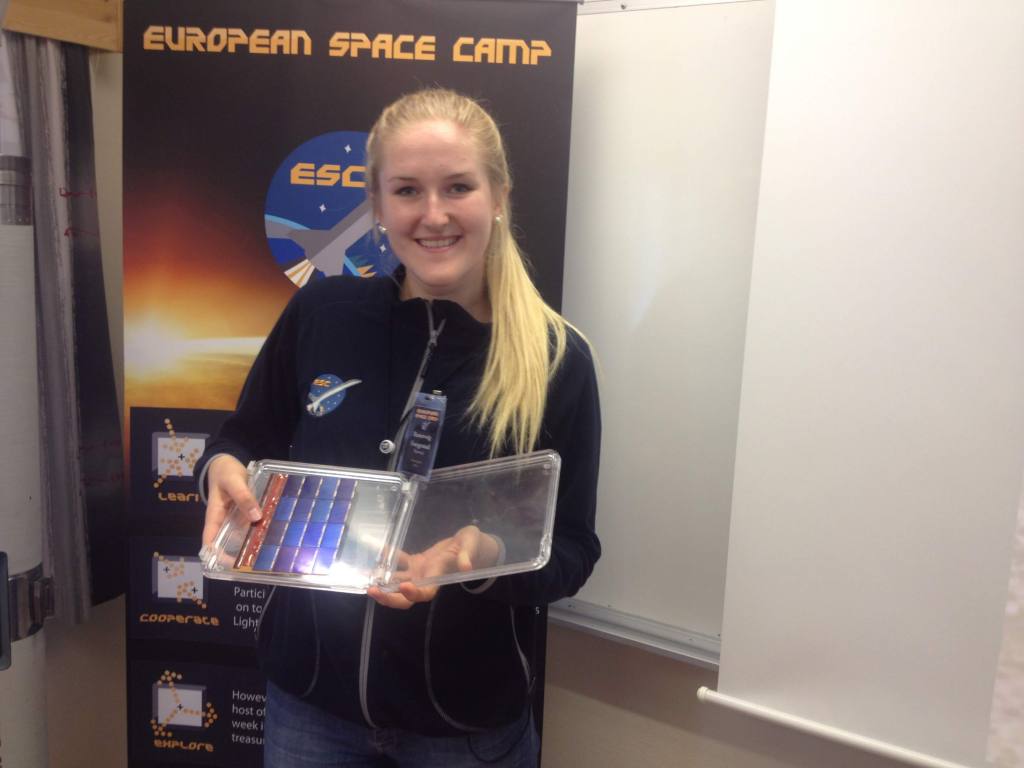 rie Færgestad.
Today there are so-called graveyard orbits in space. They lie away from typical operational orbits. Some satellites are moved into such orbits at the end of their working life to reduce the probability of collisions and generating space debris.

At European Space Camp in 2013, holding the old solar panels from the Hubble Space Telescope, full of small craters from hypervelocity impacts.

Space travel and technology is not among CASA’s core activities. But the methodology in the Centre is generic, and the aim is always improved physical protection against extreme impact. Thus, Færgestad says CASA is the perfect place to conduct her space-related research too. Her primary objective is to investigate the reliability of various numerical techniques for the simulation of impacts. The hypervelocity impact simulations will help predict the ballistic limit velocity of structures meant to protect against orbital debris. According to the project description, «the numerical methods provide a flexibility, along with a very broad scope of evaluation and parameter variation that experimental and empirical methods cannot match».

AIM: TO MAKE A ROBUST AND RELIABLE BASIC MODEL

Impact test data with velocities in the range of 10 kilometres per second and up can only be obtained at a small number of labs in the world. As Færgestad says: ˝Of course, there are no high-speed cameras set up to capture impacts on orbit, so the craters and voids found on spacecraft are used in combination with lab test data and numerical models to investigate the mechanics of the impacts”.
Understanding the mechanics in these incidents and reconstructing in the best way possible what happens is core. To compare her numerical methods, Færgestad is using impact test data from the US. Her work builds further on Else Tjønn’s MSc thesis from CASA in 2017, using Impetus Afea Solver. Færgestad will be using a combined finite element-discrete particle method in LS-DYNA.
«We aim to make a basic model of how the material behaves under this kind of extreme impact. At the same time, the model must be robust and reliable without being too computationally demanding. So far, the results are good. We keep on looking for ways to simplify the modelling, while still capturing the mechanics of the problem. I think we are on track», she says. 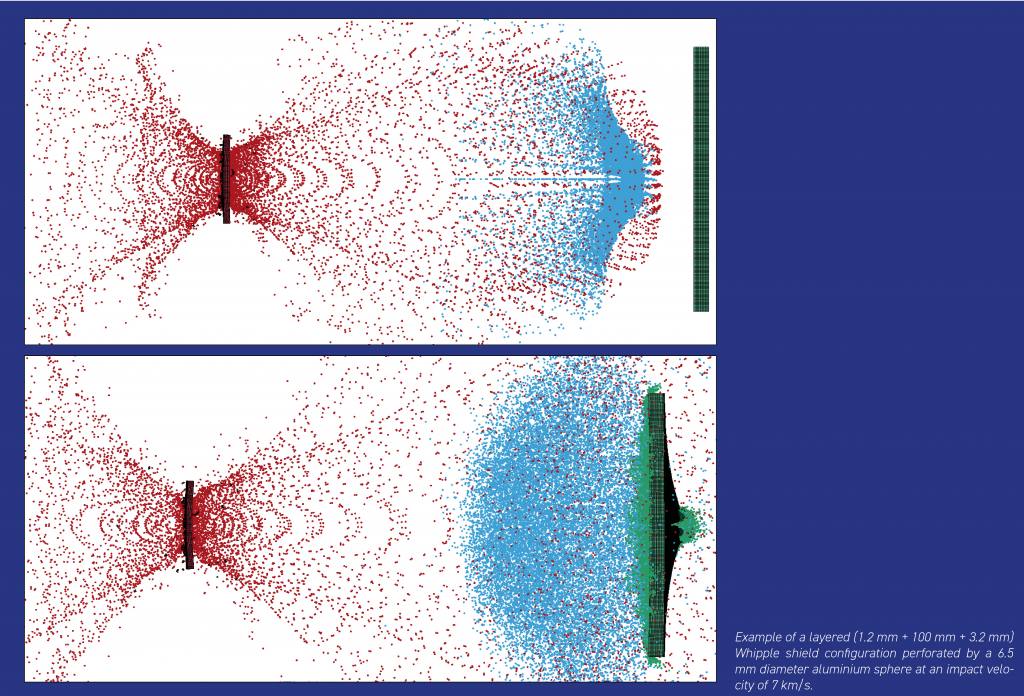 Rannveig Marie Færgestad comes from the town of Drøbak, south of Oslo. She reveals that she has been a true space technology enthusiast since she was 18, when she attended the European Space Camp (ESC) at the Andøya Space Center in Northern Norway. The camp allows young adults to spend a week running different aspects of a real rocket campaign, including the launch itself. Top scientists and engineers give lectures throughout the week.
«It was the summer of 2013. From the moment I realised that I could work with space technology in Norway, I was hooked. I went back to Andøya the next four summers, helping to organise and run the ESC», she says.

«where is the rocket club?». There was none, so she established Propulse NTNU with some fellow space enthusiastic students and was project manager for the first rocket project. Now she is head of Space NTNU, an organisation working to grow the space community at NTNU and motivate more students to choose a career in the space sector. Space NTNU is a place for the students to meet, to find a way to connect their studies to space and be introduced to the industry.

One particular evening in the spring of 2018 became a turning point for Rannveig Marie Færgestad. She had accepted an invitation from SFI CASA to all female students in their third and fourth year. Prominent, dedicated female speakers gave lectures to motivate them to pursue a master’s or a PhD degree in advanced structural analysis. Færgestad studied mechanical engineering, and that evening, she decided to choose her specialisation in structural engineering.
«I got a great impression of the Centre and the people there. When I found that I could write an MSc thesis related to space technology there, the choice was easy». 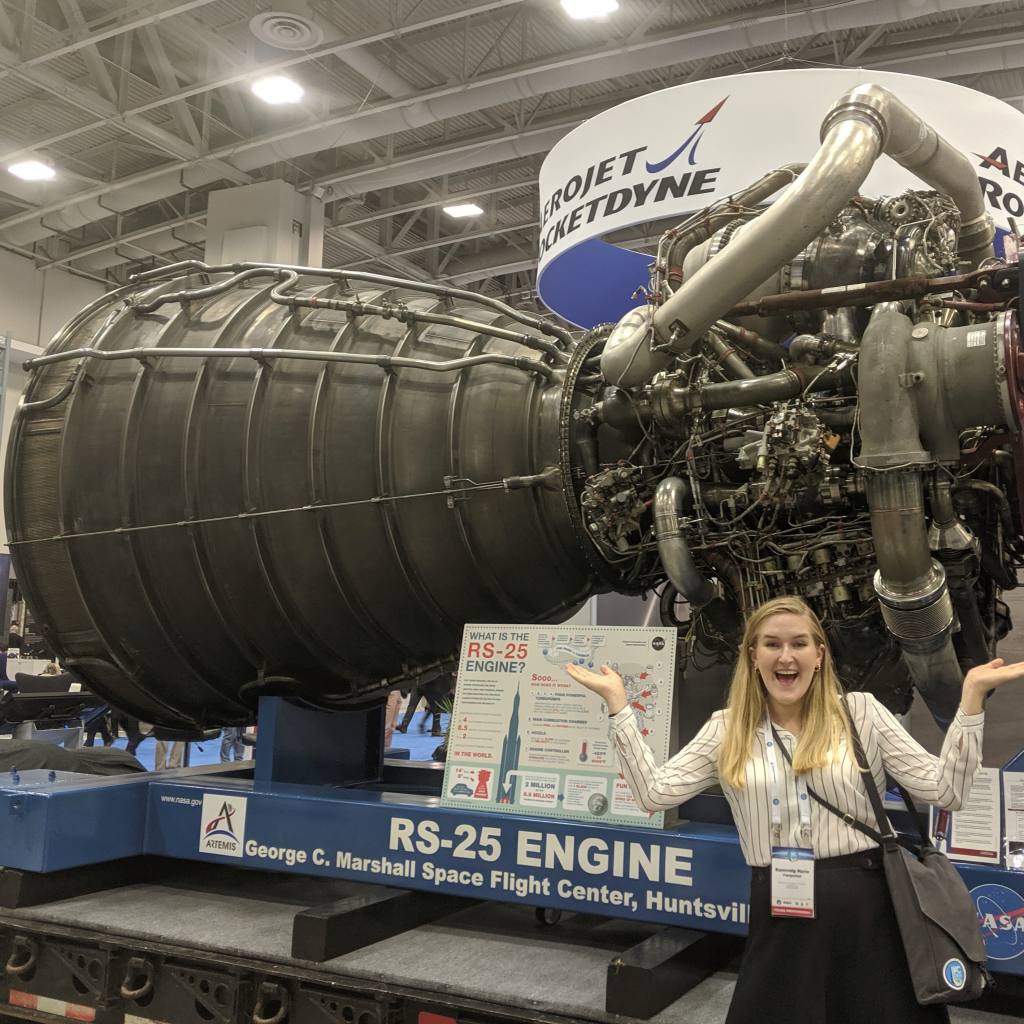 In 2019, she was a summer student at CASA, under the supervision of Professor Tore Børvik. He is now her main supervisor, together with Dr Jens Kristian Holmen, Kevin A. Ford (NASA) and Tiziana Cardone (ESA).
«This study shows that the models established at SFI CASA can be used in all types of extreme mechanics – and spacecraft protection against hypervelocity impact is really quite extreme», says Professor Børvik.