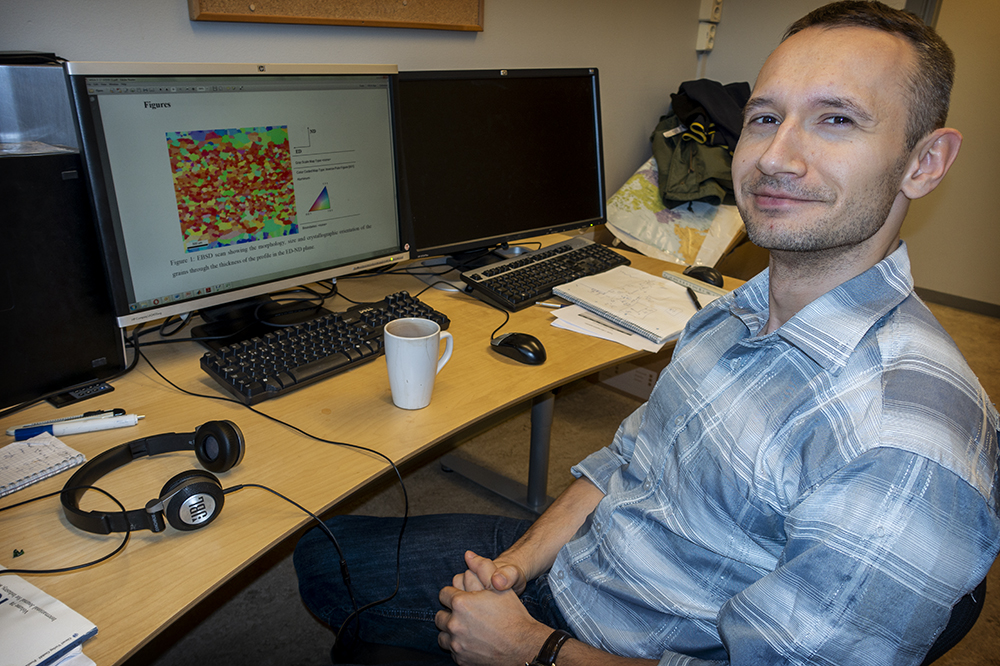 Ten years after he left Narvik University College with a fresh bachelor´s degree, Mikhail Khadyko heads north again. This time as an associate professor. The full name of Mikhail’s new employer is the Department of Building, Energy and Material Technology at UiT the Arctic University of Norway in Narvik.

«Maybe there were some professors there that remembered me», he jokes.

The Behaviour of Materials

Mikhail Khadyko is an expert in modelling the behaviour of materials. After defending his PhD thesis at NTNU’s Department of Structural Engineering in 2015, he has been a postdoctoral fellow. Until 2016 he worked for almost two years on “Closing the gaps in multiscale materials modeling of precipitation free zones in alloys”. The project was headed by Inga Gudem Ringdalen at SINTEF. Then he  was offered a two-year researcher position in the Toppforsk research project FractAl. When his work with FractAl was over, UiT wanted him in Narvik.

«They offered me a permanent position with 50/50 research and lecturing. Continuing with research is crucial for me. Besides, I will also get valuable experience in lecturing. They have a long tradition in building technology, and now they want to open a new field of research oriented towards materials and structures».

Made PFZ a Big Hit

A couple of years ago Mikhail Khadyko wrote «Cavities – The Weakest Link in Aluminium Alloys» which appeared as an article in CASA´s newsletter. It was about precipitate-free zones (PFZ) and was a great hit. Basic facts first:

PFZ are very narrow zones, tens to hundreds of nanometers wide. They were discovered in the middle of the 20th century. Questions arising in the project «Closing the gaps in multiscale materials modeling of precipitation free zones in alloys» were:

-What kind of a process could lead to a stronger material breaking before a softer one?

-How to get a better understanding of how aluminium alloys deform and why they fracture?

They called it the «Mind the Gap» project. PFZs are formed in some aluminium alloys during heat treatment, especially when the alloys are heat treated to gain maximum strength. Aluminium is quite a soft metal. When alloyed and heat treated, the material strengthens. That is due to the formation of precipitate particles which consist of magnesium (Mg) and silicon (Si).

The illogical behaviour of aluminium

Khadyko explains: Because of some very complex processes inside the material, these magnesium and silicon particles do not form neatly and evenly in every part of the metal. In fact, in some locations they do not form at all. This means, that after heat treatment, the metal is not homogeneously hard. It consists of hard reinforced grains. These are “glued” together by thin and soft, non-reinforced precipitate-free zones.

You would expect that these soft zones would always be the weakest part of the material wouldn´t you? You would also expect that fracture would always initiate and propagate through them? Well. It is not so. The behaviour of aluminium is illogical and complex.  Sometimes the hard and reinforced parts inside the grain fracture before the soft PFZ.

There are some basic facts about the PFZ that make their behaviour under loads quite challenging to model:  They are extremely small. Their exact properties are still unclear, and they are difficult to observe experimentally. In short, there are many complexities.

However, Ringdalen and company tried to approach the zones from different scales. They used tensile tests on the macroscopic level. They observed them through transmission electron microscopy. And, they also did simulations of dislocation dynamics, molecular dynamics and crystal plasticity.

Mikhail Khadyko tells that he was trying to tie together the different observations and simulations. He got some interesting results, which were later confirmed by electron microscope observations done at CASA.

The hunt for predictability

The FractAl project, which Mikhail Khadyko has worked on for the last two years, deals with fracture in Al alloys in a broader context. The Toppforsk project tries to create a unified framework of experimental and numerical techniques.

-This will allow us to predict when and how fracture in Al alloys will occur with as little experimental input as possible. To do so, some advanced micromechanical models are used to predict the behaviour of the alloy, Khadyko explains.

Both these projects were affiliated to, but not part of CASA.

Research for the Arctic Conditions

Now Mikhail Khadyko hopes that his knowledge gradually can become of use for industry – both in his new home region and other, northern areas.

The researchers in Narvik will contribute to fundamental areas of fluid dynamics, heat and mass transfer, structural mathematical modelling and applied areas.

Narvik has 19 000 inhabitants, and close to 1 600 students on the UiT campus. Mikhail Khadyko will be part of the Building, Energy and Material Technology Research Group (BEaM). Professor Bjørn Reidar Sørensen is head of the group. They conduct applied research in interdisciplinary themes. Their strengths are in construction technologies and renovation of buildings, renewable energy technologies including bioenergy, hydrogen and fuel cells and building materials especially for cold climate and Arctic conditions.

«They have a large faculty, they are building up their research and the number of students is rising. I also hope that I can continue the collaboration with the people at SFI CASA and FractAl. There is still work to be done. I have an article in progress based on data and work in FractAl and another article under review. I guess there will be a couple more papers  under the name of NTNU», Mikhail Khadyko says.