Our craving for daylight has accelerated the use of glass in modern constructions. However, for those concerned about safety, our passion for the light comes with a dark side.

SFI CASA´s Karoline Osnes is one of those people. Because, she knows more than most of us about how glass behaves under an extreme impact.
«Glass is becoming more and more of stand-alone building material. The use of it has advanced from simple windows to full façade claddings and load-bearing components. Still, the knowledge on how to calculate its ability to withstand extreme loads has not kept up with these trends», she says.

The Biggest Threat
In the years to come, we expect more severe weather events and the risks of sabotage and terror attacks are expected to continue. When the unthinkable happens and whether we sit in our car, in a railway coach or in an office building, we must be as well protected as possible.
The reason for the concern of Osnes and other experts is that as the use of glass increases, it still remains as the weakest points in a building.

This means less protection for vulnerable human bodies. During an explosion, the shockwave will propagate against the façade. In a split second, glass, concrete, aluminium or steel can change into thousands of potentially deadly fragments. When incidents like this happen, glass usually poses the biggest threat to people nearby. In the event of an urban explosion, 80 per cent of the suffered injuries is caused by pieces of glass that are forcefully hurled around.

Need for Models that Predict the Behavior
All this urge for carefully chosen glass solutions, according to Karoline Osnes.
The most common approach to reducing this threat is to use laminated window glass. This type of glass consists of two or more plates of monolithic glass bonded together by a polymeric interlayer. When it breaks, the polymer keeps the dangerous fragments in place.
How does this type of glass behave under impact? How can we use this knowledge to facilitate more 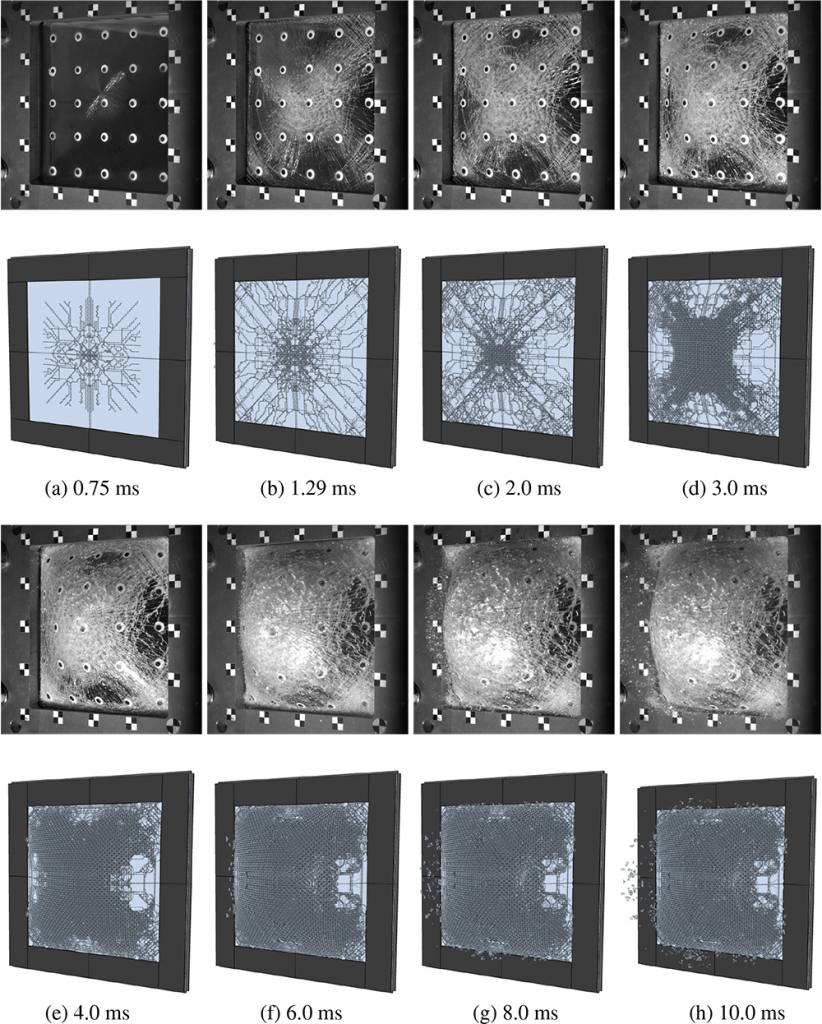 predictive glass design? Osnes says there is a strong need to develop models and methods that can predict the response before, during and after a glass fracture. Triggered by these questions, she embarked on her PhD-journey 4 years ago.

Where, When, Why and How does Glass Break?
Since then, the PhD candidate has subjected more than 100 glass panes to blast loads and ballistic impact. The experiments were performed in the Shock Tube and the Gas Gun at SIMLab, NTNU.
7 November she defends her thesis «Monolithic and laminated glass under extreme loading: Experiments, modelling and simulations».
She aims to describe the characteristics of the two types of glass as precisely as possible. Thus, it will be possible to calculate which strength a specific kind of glass should have to serve as protective.

What happens in a laminated glass after the glass breaks, depends on where and when the fracture  starts. Several other factors come in here too:
The glass type, of course, but also the different polymers, the production process, moisture, temperature, the water quality used when cleansing. And, of course, the speed of the impact.
«To simulate this is fairly complicated, so we first had to reduce the number of factors to simplify the models. It took a lot of work, but we have managed to come up with some tools that describes what happens», she explains.

Pioneer Work
Under the supervison of Professors Tore Børvik and Odd Sture Hopperstad, Karoline Osnes has performed pioneer work. Similar experiments have hardly been performed before to lure the secrets out of this attractive, yet unpredictable material. The unpredictability lies in the micro-cracks or flaws of the glass. They measure maximum 0,1 millimetres, impossible to see with the naked eye. The researchers assume that there are a certain number of them and th 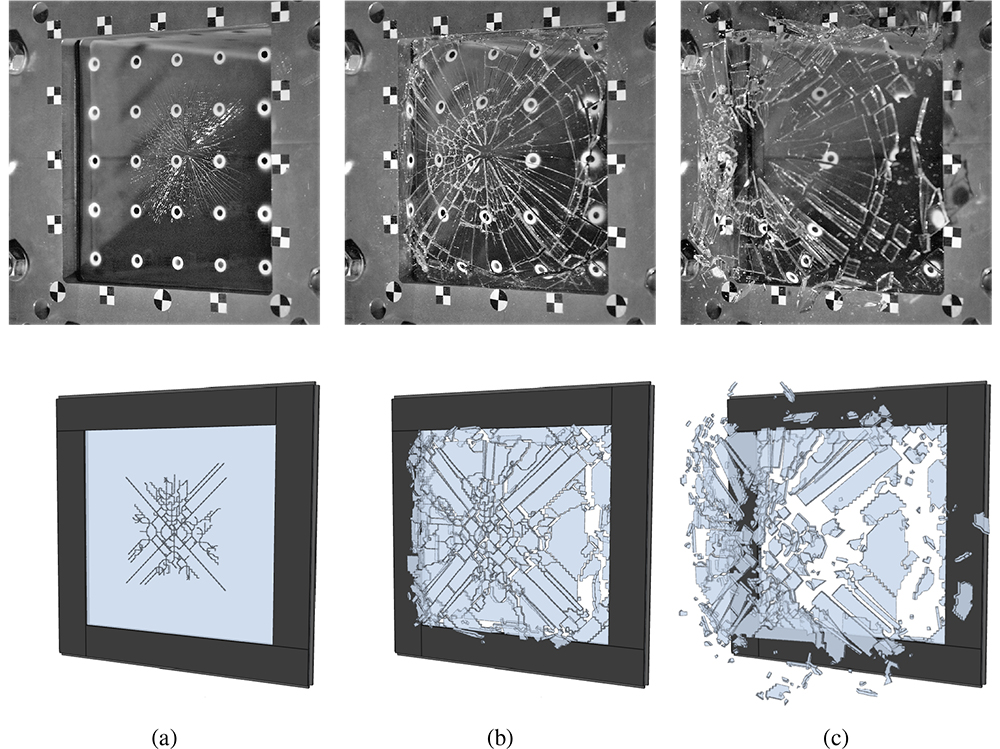 at their size and orientation vary. When glass breaks, the starting point is always in these flaws. But even if two glass panes seem identical, the microcracks will not be precisely the same. As a result, the glass will behave differently in each blast, although the impact is the same. This is a challenge, both to render the experiments and none the less, to simulate what happens.
However, Osnes take the variation of the fracture behaviour into account and has come up with a model that describe the trends seen in her tests.
«The industry notices that the strength varies, and they are interested in models that can describe this variation».  (Figure: Monolitic glass exposed to blast loading, finite element simulations versus experiments (time = 0.9 ms, 5 ms and 10 ms after impact.)

Research Put to Use by Car Manufacturers
Different players pay attention to Osnes´s research. The new knowledge will make a difference for the industry, whether they produce cars, simple windows or full facades.
With the terror attacks in Norway on 22 July 2011 as a backdrop, her work is relevant for the planning of the new government administration in Oslo. Partner of CASA, car manufacturer BMW, have already put Osnes´model to use in their standard Roof strength test. Another partner, Audi, also shows interest in implementing the model that could describe what happens in the microstructures.
As Karoline Osnes´s primar 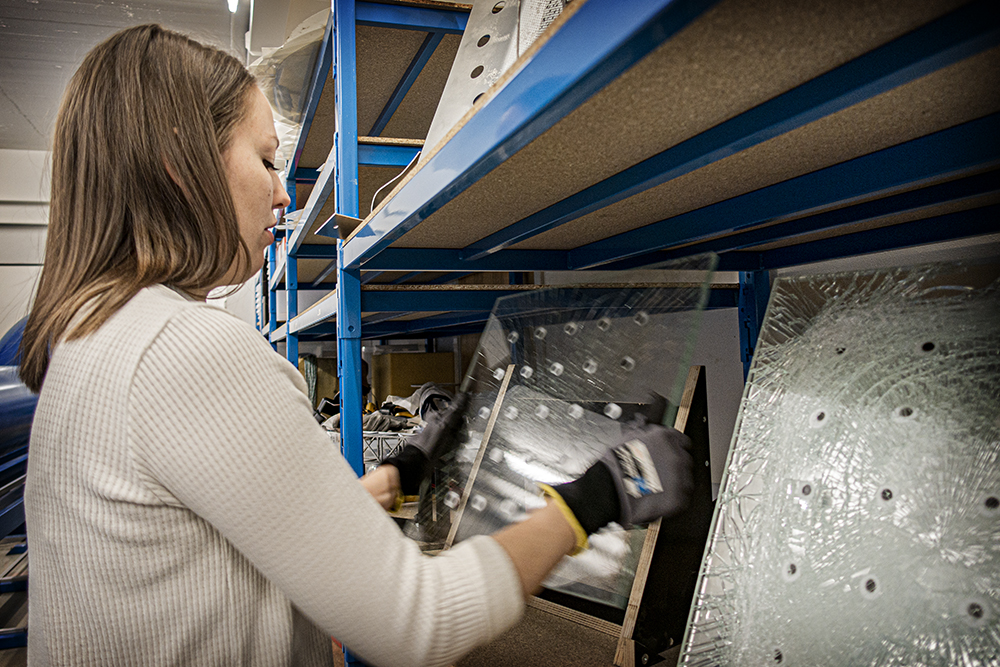 y focus has been on glass components, she hasn’t studied those fascinating micro-cracks directly. However, the plan is to zoom in on them. Partly, this goes in the new PhD project of Jonas Rudshaug. As a Postdoc, Osnes will be part of the team supervising the candidate. The new project aims to facilitate a more predictive glass design. To develop numerical tools that can predict the capacity of glass components under various loading conditions will be the main focus.

More Impact Studies Coming Up
«I have enjoyed being part of introducing new material into the Centre. Due to the relative novelty of glass as research material, there have been a limited amount of literature and little experimental data to dive into. On the other side, that has made it easier to get an overview», she says.
However, during these years, she has noticed that the activity is growing. More and more impact studies on the glass are coming up.

SFI CASA´s predecessor, SIMLab, decided to direct their attention towards anti-terror just months before the 2011-attacks in Oslo. So, the Ministry of Local Government and Modernisation joined CASA as partners because they needed know-how on the structural solutions for the objects they were going to build.

READ MORE: Solid May Be Dangerous

They needed to be confident that they can handle an impact. The knowledge they wanted included the capacity to simulate with a high level of precision how impact affects whole structures, what fragments do to them, and how resilient they are.
Now Karoline Osnes has made her contribution in the form of numerical simulation tools.
«Hopefully, these tools can serve the purpose of designing safer and better glass solutions», she says.