Equinor and Gassco collaborate with SFI CASA on testing full-scale steel pipelines from the Johan Sverdrup field in the North Sea. Several dynamic tests will be performed during the following weeks.

The research-team investigate how the pipe’s concrete coating contributes to energy absorption during impact from a falling anchor or trawl gear.

PIPELINES MUST ENDURE SIGNIFICANT STRESS
Pipelines that carry oil and gas along the ocean floor must endure significant stress. One recurring challenge is the impact of ship anchors or gear from fishing trawls. Such interference is a recurring problem in areas where petroleum and fishing industries overlap. Incidents like this could have severe consequences. Therefore, it is essential to warrant the pipelines’ ability to withstand loads and thus, to secure that they operate safely throughout their predicted lifetime.

CONCRETE AS BALLAST AND PROTECTION
The steel pipelines put to the test by CASA, energy company Equinor, and gas transporter Gassco are from the Johan Sverdrup oil field in the North Sea. The diameter is approximately 1 meter, including a 50-millimetre-thick concrete coating and a corrosion protection layer. The primary purpose of the coating is to provide the required submerged weight. Also, it serves to protect the steel against accidental loading. 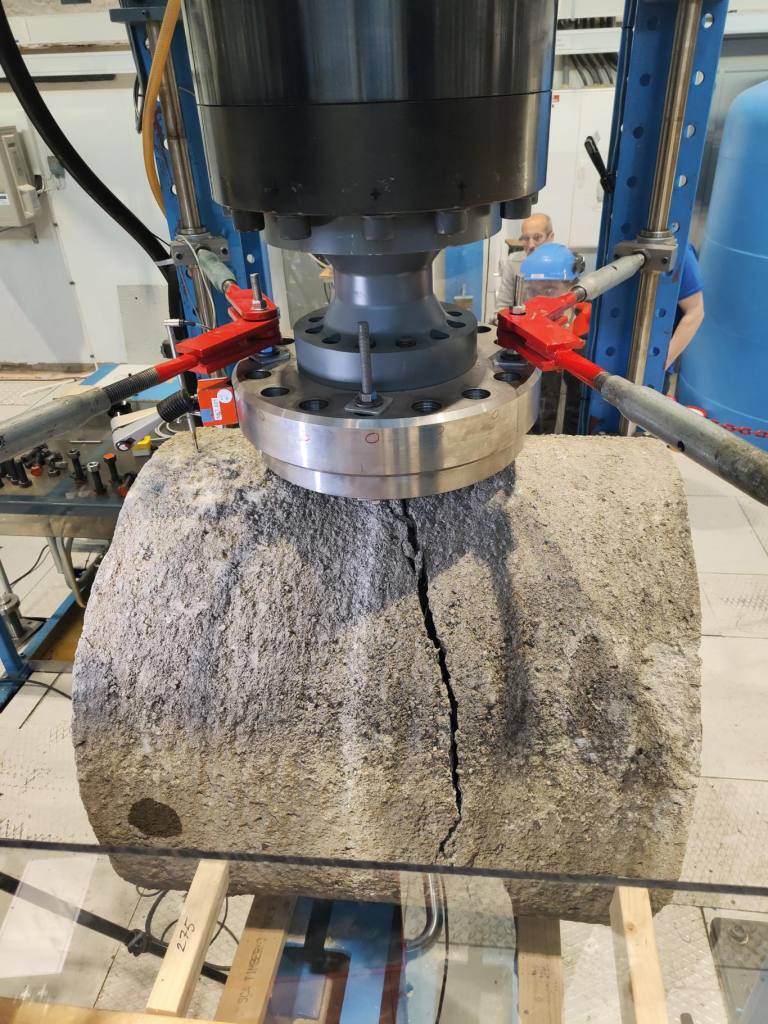 «We test the pipes to assess the structural properties of the concrete coating. We want to study how the concrete contributes to energy absorption during impact», explains Researcher Martin Kristoffersen. Accidental loading on submerged pipelines is primarily dynamic. So far, the research team have performed what they call quasi-static denting tests. In these, they use impacting objects of various shapes. They use these tests to determine suitable impact energy levels for the dynamic tests performed in the coming weeks.

THOUSANDS OF KILOMETERS WITH PIPELINES
SFI CASA’s partner Equinor has thousands of kilometres with pipelines crisscrossing the seabed in Norwegian and more distant waters. In the event of potential pipeline damage, the company need simulations for damage assessment evaluation.
For many years, researchers from Equinor have collaborated with colleagues from SIMLab and CASA to solve different engineering problems. Principal researcher at Equinor, Mario Polanco-Loria, has also worked as a researcher at SIMLab. He is a Specialist in pipeline & transport technology. When the first pipelines were put to tests on 12 November, Polanco-Loria was present, monitoring it all.

QUASI-STATIC AND DYNAMIC TESTING
According to Researcher Lars Edvard Blystad Dæhli, the data from these first quasi-static tests reveal a significant effect of the impacting object on the fracture characteristics.
«This, in turn, influences the structural integrity of the pipe; especially when the pipe is subjected to repeated impact after initial cracking», he says.
Since accidental loads on these submerged pipelines are inherently dynamic, Kristoffersen and Dæhli are excited to see the results of the upcoming tests.

SEVERAL POTENTIAL RISKS
Commercial fisheries and the petroleum industry often operate in areas of common interest. The industry is not allowed to hinder fishing activity. Thus, mooring lines and anchors, fishing trawls ploughing the seafloor, pull-overs and twisting the pipes, hooking, buckling, or vibrations could have a severe outcome.
The latest example is from early October this year when a leak spilt tens of thousands of gallons of crude oil outside Huntington Beach in Southern California. According to an Associated Press review, at least 17 accidents on pipelines carrying crude oil or other hazardous liquids have been linked to anchor strikes or suspected anchor strikes since 1986.