Into the Secrets of the Soft Zones 

Research Scientist Anette Brocks Hagen at SINTEF have a fascination for deformation and failure in materials. She delves deep to reveal precisely why and where they occur, and now she is preparing to share news on some exciting findings.

«Nanoindentation helps us discover things
that we have not been able to see before».

As a part of the team in SFI CASA´s Lower Scale programme, her work task is to determine the nanomechanical properties of Al-Mg-Si alloys. Using high-sensitive equipment at lower scales, she hunts for the weak spots and tracks initial failures in the metal´s building blocks.
We are talking about tiny things, like sizes down to one-thousandth of a hairbreadth. Led by Professor Randi Holmestad, CASA´S Lower scale-people aim to understand the atomic and micrometre scale behaviour. The overall goal is to give aluminium producers materials of higher quality. 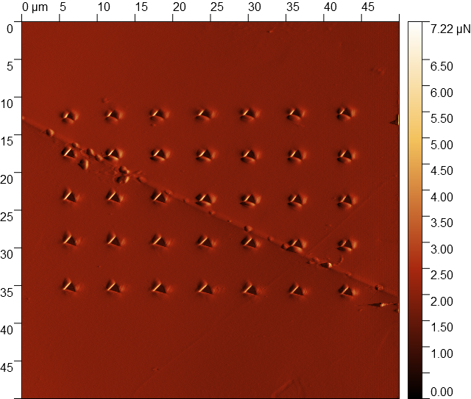 Anette Brocks Hagen is an experienced user of a technique called nanoindentation. This is a variety of indentation hardness tests applied to small volumes. Indentation is perhaps the most commonly used means of testing the mechanical properties of materials. A Scaning Proce Microscopy (SPM) image of an indented Grain Boundary is to the right.
Hagen describes it quite simply:
«Nanoindentation helps us obtain insights into the AL-Mg-Si alloys that we, to our knowledge, have not been able to see before. Currently, this is the only method to determine the accurate hardness distribution deep down in the interior of materials», she explains.
Here, at the lowest of scales,  you´ll find the Precipitate Free Zones (PFZ). As they are of great importance for the overall mechanical performance of the material, the PFZs are of great  interest to material scientists and the industry.

FAILURE STARTS AT THE MICRO-LEVEL 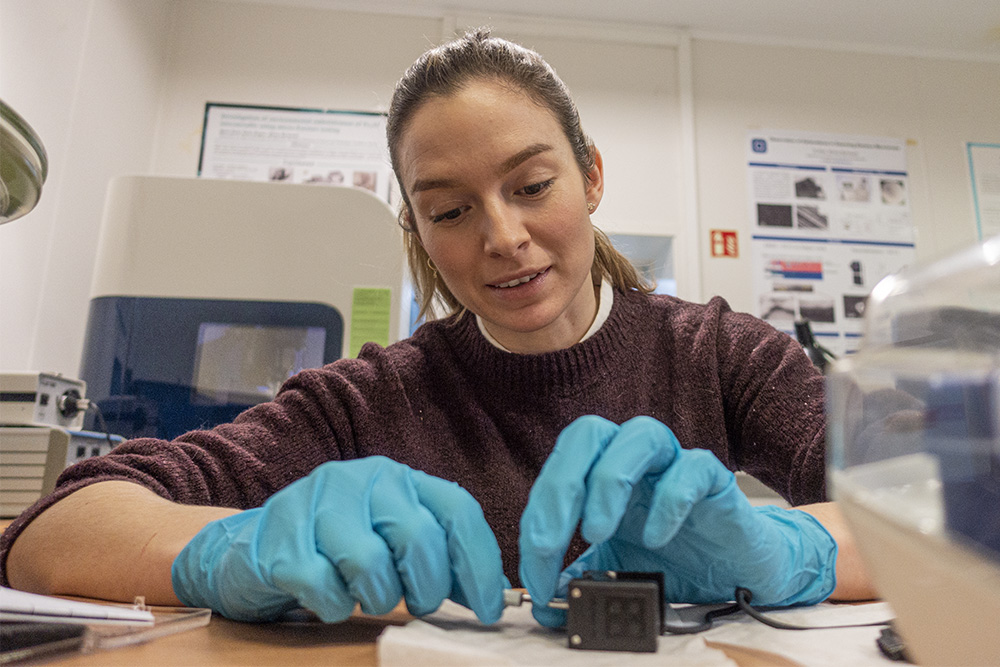 «I have always been the curious type. I was the kind of kid who disassembled things just to see how they worked. It was clear early on that I would become an engineer and scientist. The interest in lower scale evolved during my studies»

Of particular interest for the SINTEF Research Scientist is the grain boundaries (GB) that separate each grain from the others, and the adjacent precipitate free zones. She shows an electron microscope image on three grains (left), points at the boundaries between them and explains:
«These act as a sink for magnesium and silicon during heat treatment. Then, a precipitate free zone forms around the grain boundary».
These zones are like wastelands, emptied of atoms. Thus, they form unwanted soft zones that can contribute to the initiation and propagation of damage and fracture.
«This is not beneficial. The «soft areas» can lead to local deformation and fracture. How the PFZs affect the mechanical properties is not fully examined yet», Hagen states.

READ MORE: Rocking Around at The Nanoscale
READ ALSO: The Art of Modelling Aluminium Atoms 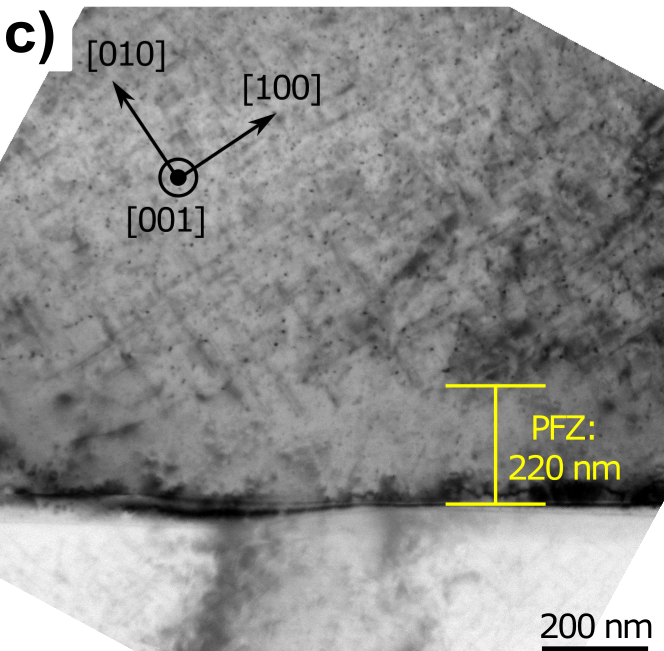 While scientists have concentrated on the area very close, only a few micrometres from the GBs, Hagen and her colleagues caught interest in what happens a bit further out. Still very close, up to ⁓10 µm from the GBs, they found a higher density of precipitates.
«This means that there is a significant contrast in the material’s mechanical properties within a tiny area. This has not been recognized before, so we scanned the boundaries, tested and re-tested again to reassure ourselves. Also, we did transmission electron microscopy analyses».
To give an idea of the scale: one nanometre is 0,000001 millimetre. The specimens Hagen sliced from the materials measured less than 60 nanometres.
The SINTEF-scientist and her co-workers combined the nanoindentation testing with advanced characterization methods. This work includes using high-resolution transmission microscopy (HR-TEM) and electron channelling contrast imaging (ECCI) to investigate the findings.

THE REMAINING QUESTION IS STILL «WHY?»

The high-sensitive equipment helped reveal the underlying microstructural features in the material. Finally, they could confirm  that the hardness increases close to the grain boundary. The origin of this hardness increase has not been recognized nor discussed in previously reported results. Meaning that it is characterized and described for the first time in this work. In turn, this would possibly have some impact on the mechanical properties of the alloy. 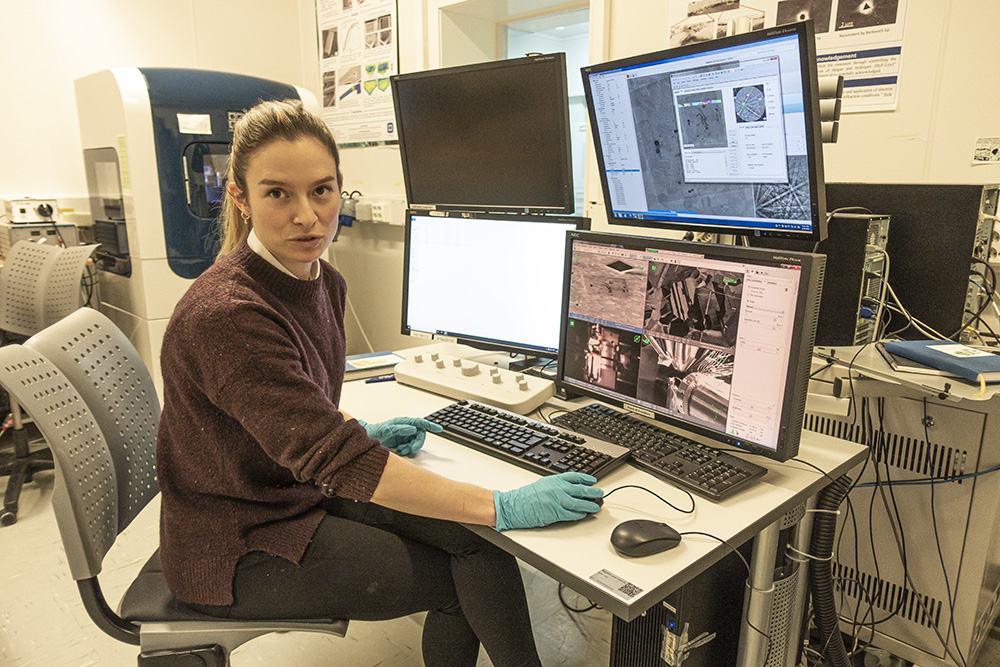 Anette Brocks Hagen says that the reason for the higher density is still under discussion. A scientific publication on the new findings is in the making. Also, other experts in the field will evaluate the results. «The big question now is simply: Why?» she says with a great deal of curious enthusiasm.

She has just started her third year as a researcher in SINTEF. She is very enthusiastic about her work. Also, she declares that she is very aware of the great responsibility towards end-users and the industry.
«As a researcher, it is easy to delve into the fascinating details and remain there. However, we collaborate closely with end-users and the industry. That keeps us stay tuned with the needs that are out there».
«When we collaborate with the industry, I want them to feel safe that we know what we are doing. Most answers we do not have yet. But techniques, infrastructure and methods develop continuously. It is a lot of hard work».
«But it is so rewarding, whether the results of our research are positive or negative, because we are contributing to our respective fields, to science and industry. I feel proud to work as a research scientist in SINTEF. I am surrounded by very skilled people who motivate me to keep going.  I look forward to going to work every day».