From Pioneer in SIMLab to Vice President in Equinor

Birgit Søvik Opheim never considered a PhD until a couple of people gave her a personal, gentle push. 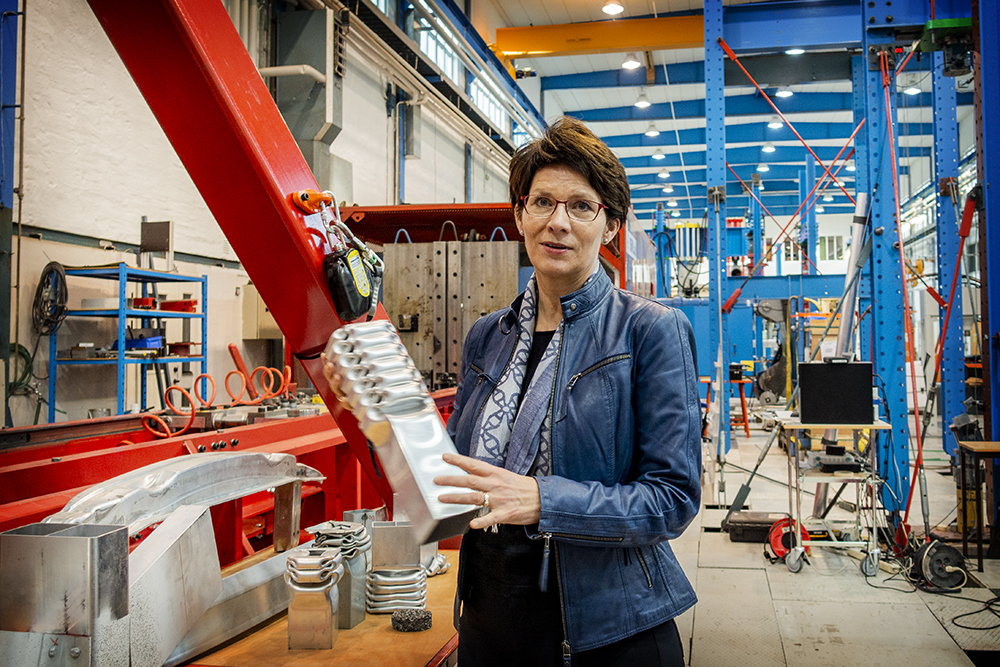 A push that changed her life and led the way to her present position as Vice President of Project Development Early Phase in Equinor. «To me, taking a PhD was the same as sitting lonely, bored and sad in an office. I thought of it as something for nerds that would take too much of my life».

Birgit Søvik Opheim laughs when she looks back on what started as a knock on her office door and ended in a PhD thesis.

The «Bending of Thin-walled Aluminium Extrusions»

The thesis has a bright red cover and the title «Bending of Thin-walled Aluminium Extrusions». Still it has its regular space on the abundant bookshelf in Professor Magnus Langseth´s office. He is the director of CASA and together with Professor Per Kristian Larsen they gave research assistant Opheim at the Department of Structural Engineering that gentle push back in 1991.

«Suddenly, I felt that the idea attracted me. We were going to be a team. People, working together with related topics and with Magnus, Per Kristian and professor Svein Remseth as supervisors. We were going to provide knowledge that was needed. Hydro was financing a scholarship».

Joined the team of pioneers

She has always enjoyed teamwork and thrives when she can discuss with other people. PhD candidates Torodd Berstad and Arne Aalberg also joined the team. They became the pioneers that later formed the research group SIMLab. Now the group hosts its second Centre for Research-based Innovation – CASA.

«I shouldn´t do it all by myself. In many ways, SIMLab and CASA use the same working model today. I think that is the recipe for the success of the Centre. There is a sense of community that goes beyond eating lunch together».

A part of the SIMLab puzzle

Does she feel that she moved the research front with her thesis? Not exactly. In her own words, it wasn´t ground breaking. It was one piece in a big picture. An early and important part of the puzzle that later became SIMLab and CASA.

Today, Birgit Søvik Opheim is still part of the CASA community. Her employer Equinor is one of the Centre’s 14 partners. The company has the largest offshore pipeline network in the world. Thousands of kilometres of pipelines criss-cross the seabed in Norwegian and more distant waters. Equinor has used the SIMLab methodology to solve engineering issues that have helped to increase safety and reduce costs.

From time to time Opheim helps CASA with recruitment by giving presentations to potential master’s and PhD candidates. She enjoys doing that and is excited if she can inspire more young people to take a doctorate.

Numerous reasons to do a PhD

She has weighty arguments about the usefulness of a PhD: It teaches you to learn and acquire knowledge quickly. It helps you to understand relevant questions faster. You gain respect for other people´s competence. You learn to give reasons for your opinions and statements and to ask the right questions. It gives you a form of personal confidence. Credibility. And you get an incredible range of career possibilities.

«I don’t think that there is a difference in what men and women can do. I just think there are some people who need an extra, personal push by someone who sees their potential.

She studied what is now Civil and Environmental Engineering at NTNU and attended courses at the Department of Structural Engineering. Simply because she loved maths, theoretical and complex subjects. Her strategy was to put in a maximum load of difficult stuff – as she was studying anyway. It was simply because she likes to achieve her real potential.

After she defended her thesis, she moved to Stavanger with husband and oldest son who was born during her PhD studies.

«When I left Trondheim, I thought I would never ever have so much fun again».

Obviously it did not turn out that bad. She admits that she has had a lot of fun later in her working life too. Before taking a position in Equinor in 2005, she worked for Exxon. For two years she worked for them in New Orleans. Her PhD thesis was about aluminium in cars, but she has as much knowledge about structural engineering. She knows how to analyse. For a period in Exxon she worked with strength calculations for oil platforms.

«My advice is to look at it as an ordinary job».

Since 2016, Opheim has been head of Equinor’s Early phase project development unit, world-wide. This is the phase between a significant oil or gas discovery or renewable energy opportunity has been found to be commercially viable. The following phase is when a field development concept is selected.

When she gave a lecture for female NTNU students earlier this year, Birgit Søvik Opheim said that she was proud of her PhD. She told them it has helped her reach her present leadership position.

«For me, doing a PhD was not a totally absorbing interest. I played volleyball and I also took on leadership responsibilities in the volleyball federation during this period. My advice is to look at it as an ordinary job».

It is well known that SIMLab and SFI CASA struggle with attracting female students and researchers. Can she give some advice on how to succeed?

«I don’t think that there is a difference in what men and women can do. I just think there are some people who need an extra, personal push by someone who sees their potential. I was not very eager to stand out. I would never have considered a PhD if it was not for those who motivated me with that small, positive push».