A Tailormade Approach to the Design of Aluminium Alloys

They are incomprehensibly small but have a significant impact on the safety of aluminium structures. Dr Asle Joachim Tomstad pinpoints the importance of primary particles.

There is a somewhat modest but delicate work of art hanging on the wall in SFI CASA’s canteen at NTNU in Trondheim. Various shades of dark grey dominate the surface. 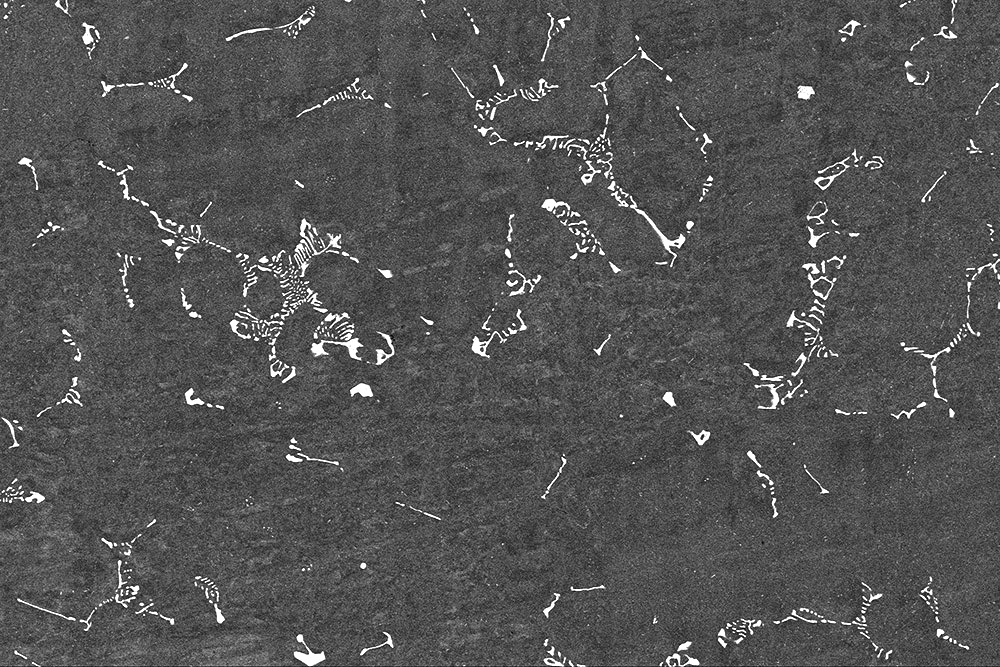 Several smaller, uneven shapes and skeleton-like structures of a much lighter grey, almost white, are randomly scattered around the image surface. An immediate association, at least for a non-expert in material science, might be that this is a photo of white petroglyphs carved and painted on a grey rock.
It is not.
It is a Scanning Electron Microscope-image: It displays a tiny section of the inside of an iron-enriched aluminium alloy. The white, uneven shapes are primary particles, deposits of silicon and iron. These little fellows are the primary source of damage in the materials, and they play the leading role in Asle Joachim Tomstad’s doctoral work.

FROM SODA CANS TO SPACE STATIONS

He defended his thesis on 16 May 2022. His main objective has been to investigate how these particles affect ductile fracture in the 6000 series of aluminium alloys. These high-strength materials typically consist of 90-96 per cent aluminium. A mixture of alloying elements such as silicon or iron fills the rest. You’ll find them in everything from soda cans to space stations. From automotive to aerospace, construction, and consumer goods, any industry appreciates aluminium alloys. The passion stems from their unique features: high-strength-to-weight ratio, corrosion resistance, formability, and recyclability.

All of this promotes the need for reliable and efficient models to determine the strength and ductility of different alloys. Ductility is a metal’s ability to sustain deformation before failure and collapse. It is an essential factor in engineering and construction work.
«Hopefully, my work contributes to the ongoing joint efforts to provide the industry with more accurate models of fracture behaviour», says Asle Tomstad.
Advanced damage and fracture models require extensive test programmes. These include modelling and simulation at multiple scales and customized laboratory experiments. This is what Tomstad has been doing during four years of doctoral work.

He is part of the Toppforsk project FractAl (2016-2022). Under the leadership of Professor Odd Sture Hopperstad, the project’s scientists have paved the way for an entirely new way to design aluminium structures. They have established a modelling framework that enables designers and industrial engineers to select the most suitable aluminium alloy for a given structure. Plus, other benefits include reducing the need for time-consuming and costly mechanical tests.

Asle Tomstad has performed an extensive and impressive number of experiments. The activities in FractAl link closely to SFI CASA and SIMLab. The latter is known for being the research group that tortures materials. Tomstad has maltreated his share, as he has subjected aluminium specimens to various loads, stress conditions, strains, and tension in different directions. All with the sole purpose of unravelling the mechanisms that lead to fracture and failure.

THE RULERS OF DUCTILITY

The thesis «Ductile fracture of aluminium alloys in the low to moderate stress triaxiality range» has four parts. Before we dig deeper into the details: a few words to explain the relationship between the primary particles and the metal’s ductility. As they consist of iron and silicon, the primary particles are rock hard. When the material deforms under an external load, they crack. Then they form voids. As the strain increases, the voids will grow and eventually merge with other growing voids. When this happens, the material fractures and fails.
«It is well accepted that the primary particles are the main source of the voids. However, we do not know their exact effect on fracture», he says.

One feature that makes his work unique is the use of tailored alloys. By adding extra silicon and iron, their particle content is more than three times the content of an engineered alloy. 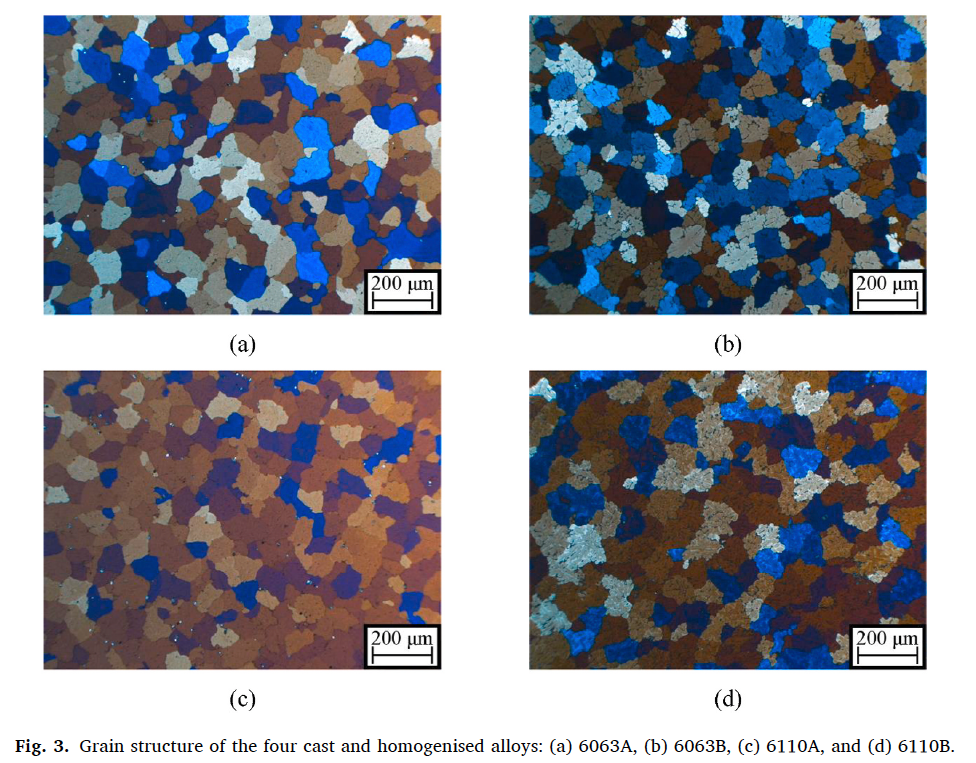 In the thesis’s Part 1, he conducts tension tests for four alloys to assess the particle’s effects on ductile fracture at different stress states. Half of the alloys are commonly used, the other half tailor-made. He strained the specimens in tension until they fractured. Afterwards, he characterized the materials using scanning electron microscopy (SEM), optical microscopy, and X-ray diffraction.

Asle Tomstad’s tailor-made approach enabled him to isolate and investigate the exact effect of the small yet significant primary particles. Part 1 establishes the base for further investigations in parts 2, 3 and 4 of his thesis.
«The experiments show that the tailor-made alloys have a poorer ductility. The reason is their higher content of constituent particles. What’s unique with my work is the approach. The tailor-made alloys allow us to quantify the detrimental effect of said particles. In addition, important findings confirm that the clustering is harmful as it reduces the metal’s ductility». 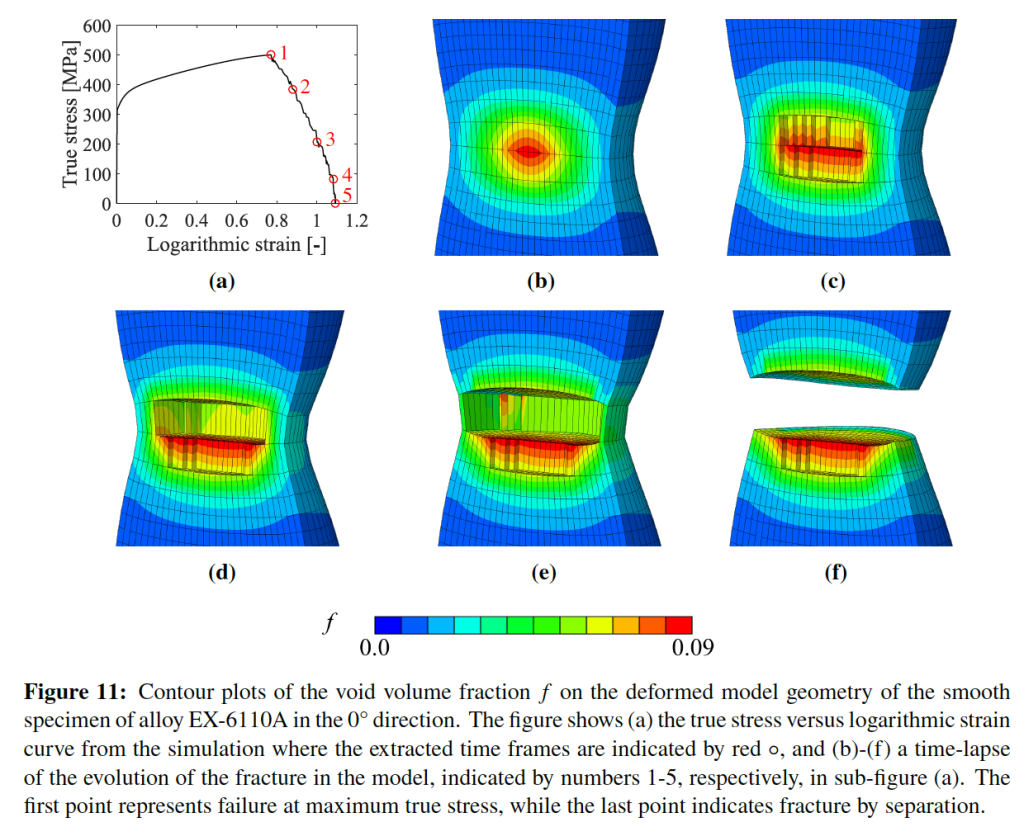 In part 2, Tomstad chose what he describes as a more pragmatic approach.
«We wanted to investigate whether we could use well-known numerical tools to simulate the behaviour we saw in the tests. The results showed that we succeeded quite well. The predictions had a satisfactory accuracy».
The 3rd part describes tests of 2 alloys in a broad spectre of load paths and stress states. The materials show complex behaviour. Their base material, the matrix, was similar. However, one alloy had three times higher area fraction of primary particles. Tomstad explains that here he made exciting – and challenging- discoveries that he now investigates further.

The researcher describes Part 2 and 3 as a pragmatic and sober approach to recreating the behaviour we see. Part 4 is more cutting-edge research using crystal plasticity modelling to simulate deformities. Here the focus is the influence of particles when subjecting alloys to shear loading.
The PhD candidate strained the shear specimens until fracture. Further, he introduces one of his favourites, the Crystal Plasticity Finite Element Method.
This method allows for modelling the initial texture and its further evolution. Thus, it enables an accurate prediction of what happens inside the alloys. By combining test data and math, Tomstad saw that a higher content of particles damages ductility.

«In all, I would say that my work supplies a great deal of new information into ongoing discussions. I think my thesis contributes significantly to our field», he says.
When asked if there is anything he finds particularly fascinating deep within the interior of aluminium, he answers:
«What happens on the macroscopic scale starts to evolve deep down in the microstructures. The important stuff happens deep down on the lower scales. That’s fascinating».

Asle Joachim Tomstad defended his thesis on 16 May 2022. Now, he works as a research scientist at SINTEF, His supervisors have been Professors Odd Sture Hopperstad and Tore Børvik.