A Polymer Guy with a Passion for Python

Sindre Olufsen’s efforts to understand the deep interior of polymers can improve the safety of everything from cars to planes, and perhaps even heart valves.

He appears to be one of those young, unassuming scientists who prefer to listen and observe rather than to talk loudly and much himself. He is always wearing some cool T-shirt, only occasionally popping out of his office to top up his coffee-mug before disappearing into his cave again.

A LITTLE OFF THE BEATEN PATHS

But, if you talk to Sindre Olufsen privately, the modest impression fades quickly. The 32-year old doctor-to-be has strong opinions and has confidence in his own skills. Obviously, he also dares to go a little off the beaten paths in academia.  In fact, a great deal of his PhD work is based o techniques never used in CASA, until now.
«I guess I am a bit of an atypical scientist. I mostly enjoy the early phase of research, that is, getting an overview and figuring out how to approach a problem. I like to quickly test possible approaches and have this childish joy of creating and trying new things. To prototype, to test and make demos to see if things work – that is my thing. I’m too impatient to enjoy writing and refining article drafts for months and months».

POLYMER PUT UNDER STRESS AND STRAIN

how the failure behaviour of polymers is affected by stress triaxiality and the strain rate. It all started with a grand, experimental study that confirmed earlier observations:
«The polymer we looked at changes its volume during deformation, a phenomenon caused by nucleation and the growth of tiny voids inside the material. In fact, several of his test cases showed void volume fractions reaching 30 per cent, making the material resemble a foam more than a solid block of plastic. But how these voids were distributed within the specimen, was one of several questions that were impossible to answer at the time.

To see what is going on inside a piece of plastic while it is deforming is an extremely challenging task. Sindre Olufsen found a way around this. Together with his supervisors Professor Arild Holm Clausen and Odd Sture Hopperstad, and Professor Dag Werner Breiby at Department of Physics, he has published the research paper «X-ray computed tomography investigation of mineral-filled PVC under monotonic loading». Olufsen explains: 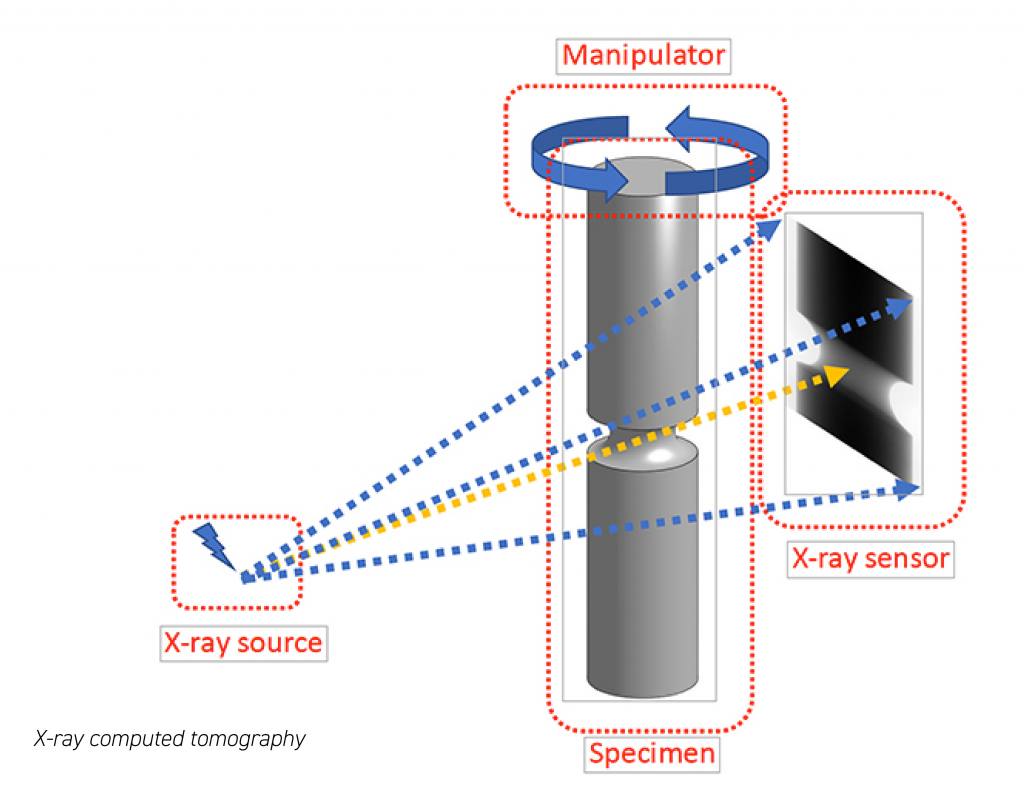 «X-ray computed tomography (XCT) is a technique which allows sections within a tensile specimen to be imaged by using an X-ray beam. However, acquiring a single scan takes in the order of 1 hour, so we had to pre-deform a set of tensile specimens and scan each of them in their unloaded state. This approach allowed us to see how the voids were distributed inside the tensile specimen. We saw that the distribution of voids is highly non-linear and that the shape changes during deformation».
However, the XCT study came with a significant limitation: The inability to capture transient changes, which are crucial when studying polymeric materials. There are ways to overcome this shortcoming. One possibility is to reach out for a higher brilliance X-ray source such as a synchrotron. However, this is a very costly and unpractical solution, according to the PhD candidate.

We found an alternative solution by exploiting the axisymmetric nature of their tensile specimens. «This allowed us to reduce the acquisition time of a scan from 1 hour to 3 seconds. By using this technique, we were able to do a loading-unloading experiment in-situ using only equipment available in our local physics department».
Thus, Sindre Olufsen developed a novel method to measure how voids grow and spread inside a polymer during deformation. That is, given that you have an axisymmetric tensile specimen.
«The novelty of this method is that we can do these experiments using readily available equipment, making this kind of measurements available to a broader audience and our industrial partners», says Olufsen.

«I guess I am a bit of an atypical scientist».

CONTRIBUTING TO THE OPEN-SOURCE COMMUNITY

The way he describes himself as a researcher might as well explain why his doctoral work is referred to as original, creative and groundbreaking. That goes for the originality in the work itself, and for the fact that he chose to publish two pieces of software developed during his thesis: The digital image correlation toolkit (µDIC) and the code which allowed him to do the in-situ  XCT measurements (AXITOM)».
His first software article as a corresponding author is titled «MicroDIC: An open-source toolkit for digital image correlation». Olufsen describes it as a large project, formulated as a package and written in the popular programming language Python. The source code is open, making it accessible to a broader user group, and anyone is free to inspect, modify, and improve the code. 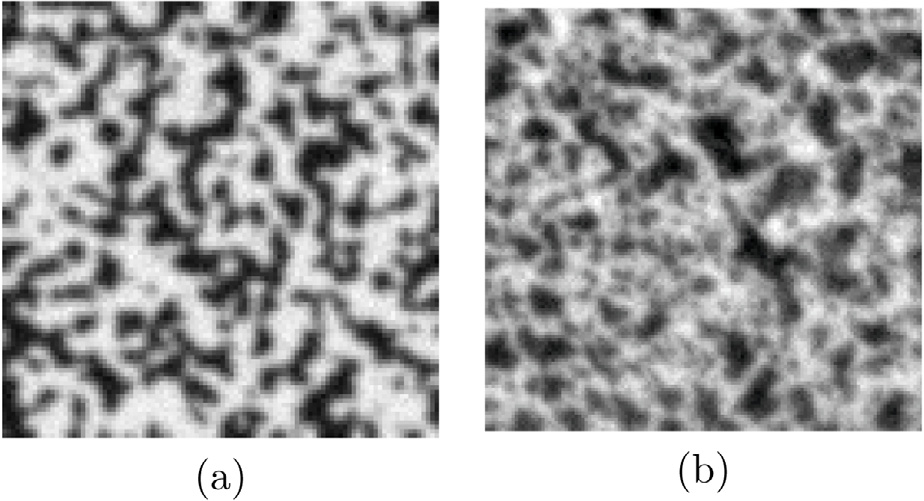 An additional, but an essential component of the MicroDIC toolkit is the “virtual laboratory”, used to generate and deform speckle images, including camera artefacts such as fill-factor and noise. Simply, Olufsen, Marius Endre Andersen and Egil Fagerholt have developed a set of tools which produces a virtual speckle pattern that deforms according to a known deformation field.  The figure (right) shows Fig. a comparison of (a) a synthetic speckle and (b) a real speckle.
«It helps us run the DIC analysis as if it was a real experiment, but now we know the correct result. This tool gives you the safety of not destroying anything when you modify the code and demonstrates that everything is working as it should. In that way, it facilitates further development», Olufsen explains.

TRANSPARENCY THAT PAYS OFF 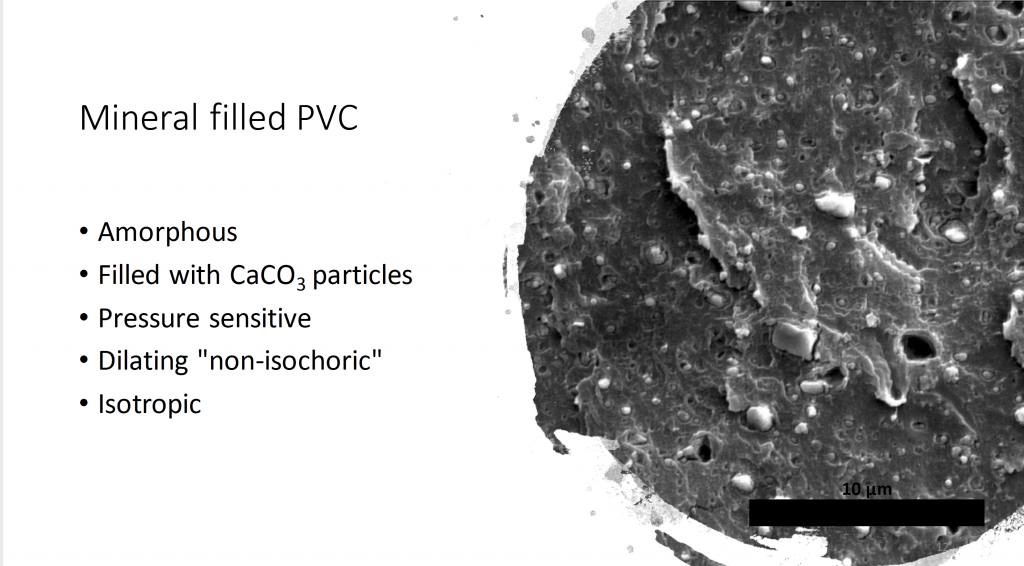 «During work a PhD thesis, we all write large amounts of code or software. In most cases, it’s put in a drawer and forgotten after we are done using it. This is sad, because others may benefit from using our tools. By sharing the software, we can increase the transparency and credibility of our work».
He finds sharing code developed during research an ethical principle, simply because the codes are paid for by the public purse and should be accessible and free for anyone. Of course, sharing open-source tools is also a source of future citations. It pays in publication points, the hard currency of academia. Besides, he finds code work fun. At GitHub, the world’s largest community of developers to discover, share, and build better software, Sindre Olufsen presents himself as «PolymerGuy, Mechanical engineer and happy coder».
«I believe that in the future, scientific journals will demand to have the tools used in the studies to be available for review, which will fuel the use of open-source codes», he says.

So, no doubt. Olufsen is not a fan of locked up, complicated and costly closed-source tools. Take, for instance, Digital image correlation (DIC). He describes it is an incredibly powerful tool, possessing applications far beyond material testing.

«However, most DIC tools available are either closed-source commercial products with a fascinating price tag or open-source codes with questionable documentation and testing. During the work with my thesis, we ended up with developing a tool which actually performed very well and was written in the most accessible programming language we got (Python). As an effort to make the tool available to everyone, we published the code under a very liberal license, making it easy for everyone to use and extend». 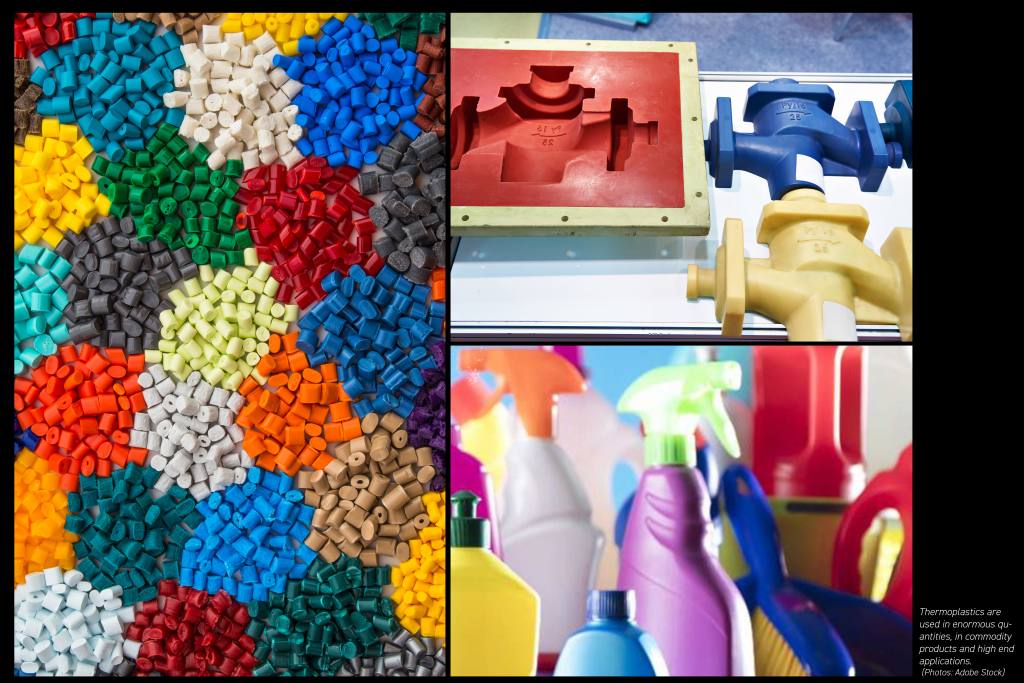 So, obviously, there are a lot of benefits of Sindre Olufsens PhD work. But for whom do they make a difference? The answer might be, to most of us.
We encounter plastics every day in the form of packaging, building/construction, transportation vehicles, medical equipment, scientific instruments, institutional products, furniture and furnishings and electronics.
«When we know how the material reacts to different loading conditions, we can make improved components and reduce material usage».
The open-source tools have already spread to several research groups worldwide.
«As of now, I know the µDIC toolkit has been used for analysing damage propagation in composite materials, for measuring the deformation of heart valves»,Olufsen tells.

A NORTHERN SATELLITE FOR CASA 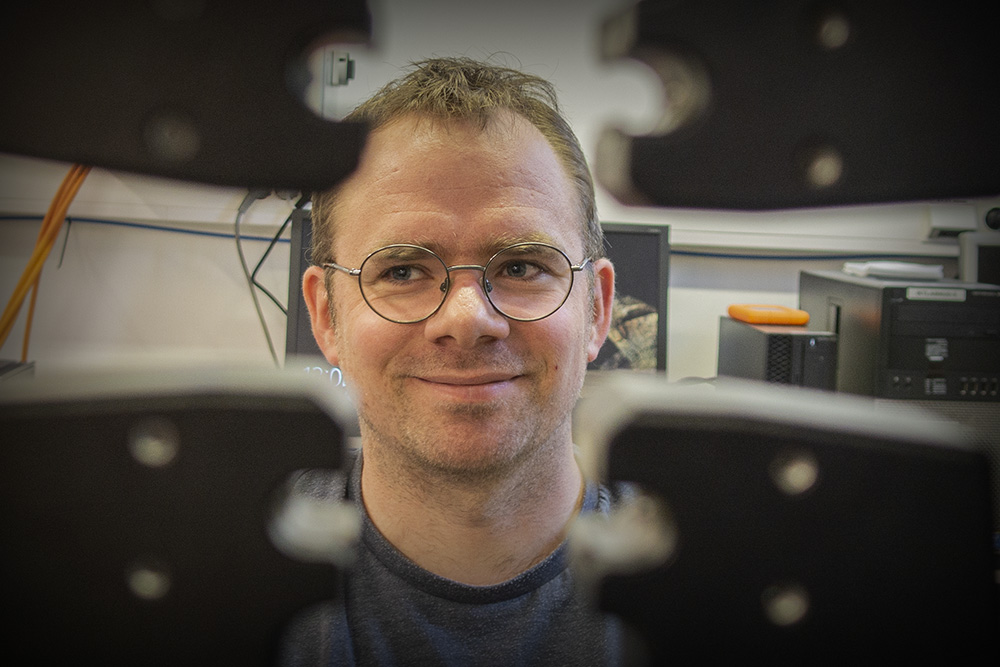 For the next two years, he will be a post-doctor at SFI CASA. He has moved north to the city of Mo i Rana with his partner and two small daughters. He grew up in the municipality of Hemnes, not far away from where they are now settled. As he will work from Campus Helgeland, CASA has got its first-ever satellite office.
«I will continue on a similar track, working on both measurement techniques as well as experimental and numerical studies aiming to explain the failure behaviour of thermoplastics», he says.